Carrie Underwood took the stage tonight at the 2018 ACM Awards to perform her new song “Cry Pretty”. Prior to performing, she warned fans that she might look “a bit different” after a “hard fall” at her home resulted in over 40 stitches to her face, along with surgery. But, had we not known about an accident, we never would have noticed anything on her face. Underwood piled on the makeup, with glittery tears, contouring and rouge on her cheeks, so it was hard to see a scar of any kind. She also had her hair in her face, as it was parted to the side.

At the end of her performance, Underwood received a standing ovation and several tears, as well as smiles, were seen from audience members who cheered her on. She stood on stage for about thirty extra seconds and it almost looked like she would address the crowd, but she didn’t. Underwood humbly nodded, appearing grateful for the applause and acceptance.

Prior to Underwood taking the stage, ACM Awards host Reba McEntire, according to People, said, “The main thing that I’m looking forward to seeing Carrie is to see Carrie. I am looking forward to going over and hugging her neck and saying that I’m glad she’s back in the swing of things.” When announcing Underwood’s performance tonight, McEntire said that she was so happy to see her back on stage.

Tonight was her first performance since her accident in November 2017, where she injured both her wrist and face. The incident occurred just a few days after Underwood co-hosted the 2017 CMA Awards with Brad Paisley. Before deciding to get back to work again, Underwood had told fans that, “When I am ready to get in front of a camera, I want you all to understand why I might look a bit different. I’m hoping that, by then, the differences are minimal, but, again, I just don’t know how it’s all going to end up.” Underwood’s husband Mike Fisher has also gone back to work. He briefly retired from hockey but is now back on the ice.

Fans had a hard time seeing any difference in the singer’s face and social media was flooded with questions asking about the injury. Underwood most likely has a light scar and chose to cover it up with stage makeup, but we can only speculate.

Anyone else staring hard at Carrie Underwood's face to see if you can even see a difference? #ACMawards

Underwood’s song “Cry Pretty”, from tonight’s performance, is reflective of her recent emotional journey and she told Variety that she wrote the song with three other women,, who call themselves the Love Junkies. Underwood dished that, “I joined one of their writing sessions last year to see if we could come up with some magic … and we did! The title refers to when emotions take over and you just can’t hold them back. It really speaks to a lot of things that have happened in the past year and I hope when you hear it, you can relate those feelings to those times in your life. It’s emotional. It’s real. And it ROCKS!” 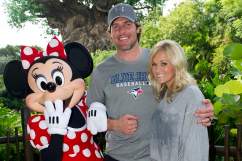