Carrie Underwood took to Instagram on Wednesday, April 4, to share the first picture of her face since before the new year. Underwood did not include a caption with the photo, which showed her sitting in a recording studio.

Underwood has not posted any selfies in which her face has been completely visible since she fell on the front stairs of her home back in November.

In that fall, she ended up breaking her wrist and also hurting her face. Several weeks later, she posted a blog on her private website (that is accessible by subscription only) to give her fans an update. In that post, Underwood revealed that she needed 40-50 stitches and that her facial injury was quite serious.

“When I am ready to get in front of a camera, I want you all to understand why I might look a bit different,” Underwood also wrote.

This sent Underwood fans into a frenzy, many wondering how the country singer’s face looked following the accident. The longer she went without posting a photo of her face or stepping out in public, the more curious people have grown. While it does seem as though Underwood is ready to get back into a more normal social media posting habit, she has not yet posted a picture of her full face, dead on.

The only thing that fans have to go on is a candid picture that was posted by reality star Adrienne Gang, which you can see here. Fans were quick to point out that Underwood didn’t look much different in that photo, which was taken just a couple of weeks after her fall.

Earlier this week, Underwood made headlines when she took to Twitter to vent about a call made by a ref during a hockey game. Her tweet (below) got quite a bit of attention from social media users. Not surprisingly, Predators fans rallied behind Underwood, who is married to Nashville’s former captain and recently re-signed center, Mike Fisher.

Goaltender interference? Are you out of your mind? On what planet? #WorstCallEver @PredsNHL #NSHvsFLA

Had this goal been good, the Predators would have clinched the Central Division and the Western Conference’s top seed.

Heading into the post-season, fans can expect Underwood to attend upcoming playoff games in Nashville. She will undoubtedly be on-hand — in the flesh — to cheer on the team and to support her husband. If this does turn out to be the case, Underwood won’t be able to hide her face for much longer. 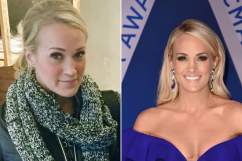