Sammi “Sweetheart” Giancola is known for her relationship on the Jersey Shore with Ronnie Ortiz-Magro, but the couple ended their relationship for good in 2016. Two years have passed and Giancola is now in a long-term relationship with a man named Christian Biscardi. As the new Jersey Shore reboot airs on MTV, Giancola has decided to not participate. The show must go on without Giancola, but, in the meantime, she says she is happy in her life, appearing on her own podcast, “Just Saying”, and enjoying her time with Biscardi. Get to know more about Biscardi and his relationship with Giancola in our facts below.

1. Biscardi Is a Major Reason Giancola Has Not Returned to “Jersey Shore”

Sammi Sweetheart fans are said to hear that Giancola is not participating in the new Jersey Shore reboot, but Giancola has explained her reasons for not returning. In a lengthy post on Instagram, Giancola stated, “I have chosen not to join the show this season because I am at a completely different place in my life right now focusing on my businesses and relationship. I am not the same person as I was when I was 22. At 31, I am currently extremely happy in every aspect of my life and want to avoid potentially TOXIC SITUATIONS. However, it was a difficult decision as I love my roomies. I’ve decided to focus on me, my future, and what truly makes me happy. I will forever be grateful to ‘Jersey Shore’ and everything it has brought to me! I’ve just decided to live my life for me these days.”

In addition to the above message, Giancola posted a caption that reads, “I love you guys! Thank you all so much for your DMs, comments, messages & kind words. I read them all and am forever grateful and thankful for you guys!! #MyFansRock #ShoutOutToALLofYou stay tuned. I’m not going anywhere.” Jersey Shore: Family Vacation has already been given the green light for season 2, so maybe Giancola will make an appearance.

After hearing that Giancola would not be returning to the show, her ex Magro told Us Weekly that, “We started this all together and I would have loved to have finished it together because now everyone thinks it’s because of me she didn’t come back, but it’s because she has a boyfriend.” Magro mainly said that it’s Giancola and her boyfriend’s decision.

In an interview with In Touch Weekly, Giancola’s former Jersey Shore co-star Jenni “JWoww” Farley said that, “We’ve met him and he is such a sweet guy. He makes Sammi happy, so he’s good in my book.” It appears that Giancola still remains close with many of her former Jersey Shore co-stars and that several of them had not kept in contact with Magro-Ortiz for a while.

Giancola actually appeared on a reunion road trip special with several cast members for the E! network in 2017 and when she was asked by Mike “The Situation” Sorrentino if she still spoke with Magro, she said no. It seemed that Giancola didn’t have the nicest feelings about Magro at the time.

3. Biscardi and Giancola Aren’t Tying the Knot Any Time Soon

is it just me or does Sammi Sweetheart’s boyfriend look like Ronnie and Mike mixed together pic.twitter.com/6NAcTayHvJ

Some fans have commented that Biscardi looks a lot like ex-boyfriend Magro, while others have joked he also looks like a cross between Magro and Giancola’s former Jersey Shore housemate Mike “The Situation” Sorrentino. Whatever the case is, Giancola and her man are going strong. Giancola recently told OK! Magazine that her relationship with Biscardi is “amazing” and that they’re “very much in love”.

According to Giancola, she and her man may be in love, but they aren’t walking down the aisle any time soon. But, Giancola’s Jersey Shore buddy has a different opinion, telling OK! that the couple is so in love, it’s bound to happen soon. In response, Giancola said, “You never know.”

Ex Magro may actually be closer to walking down the aisle than Giancola. Recently, he and girlfriend Jen Harley welcomed their first child together, a little girl. The birth happened right before the premiere of the Jersey Shore reboot.

4. The Couple Tries to Keep Their Relationship Private

A few proper pictures with my stunning girlfriend. What gorgeous hair. Hers is great too! ?

Though the couple likes to post photos together on their social media accounts, Giancola has said that she likes to keep her dating life as private as possible. When reflecting on her relationship with ex Magro, she wasn’t a fan of being brought into conversations when he appeared on the reality show Famously Single. On her podcast, “Just Saying,” she explained that, “I like to keep things private … this is also something I want to address. People saw me do a Distractify interview where I was like, ‘Oh it’s disappointing that he was doing a show,’ and I just want to clarify that it was a little bit disappointing because I am so private so the fact that I thought he was doing a show to possibly air out our relationship was not cool. So I thought that was disappointing so I just want to like clarify that. But other than that, it is what it is and I wish everybody well …”

On Famously Single, ex Magro talked about how difficult his split was from ex Giancola. He also discussed how he was unfaithful and volatile when they were together, even going as far as to try to reconnect with her for closure. During the course of filming and for a few months after Famously Single ended, Magro-Ortiz carried on a romantic relationship with reality star Malika Haqq.

As for Giancola’s privacy in her current relationship, she told In Touch Weekly that, “It’s kind of exciting. He’s no one in the business, it’s just somebody. I’m learning to keep my relationship stuff a little more private — so that’s all I’m gonna say about it.” Well, whatever the couple is doing, it seems to be working.

To my bald headed, chrome-domed friends all talking shit and telling me to cut my hair because they’re jealous of my thick, long, luscious, voluptuous locks, I’ve decided to finally cut it and mail you all pieces of it to duct tape to your bald foreheads and fiveheads just in time for Easter as a resurrection to your hair and so no one mistakes your noodles for Easter eggs during egg hunts. God bless ?

Biscardi’s Facebook page says that he is from Washington Township in New Jersey and he studied accountancy at Rowan University. According to In Touch Weekly, Biscardi works as a consultant at Code Green Solar, “one of the leading providers of solar power solutions across North America.” 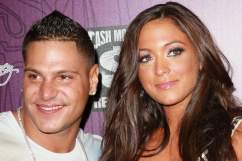