Erika Jayne (Girardi) of Real Housewives of Beverly Hills fame has an estimated net worth of $5 million, according to the website, Celebrity Net Worth.

Aside from making money on the hit Bravo television show, Jayne also makes money from her gig as a singer (which is where the stage name comes into play). Jayne added another income stream to her bank account by releasing her very first book, Pretty Mess, on March 20, 2018.

Erika Jayne’s husband, Tom Girardi, is a successful attorney in the southern California area. Celebrity Net Worth estimates his net worth at $30 million.

“It’s expensive to be me,” Erika Jayne sings in one of her hit songs — and she isn’t kidding. In a recent interview with InTouch Weekly, the blonde beauty revealed that she spends about $40,000 per month on “clothes, shoes, and accessories.”

“It’s a lot… But it’s all for work. I’m on television, this is what I do for a living. It’s part of the job,” Jayne told the outlet.

In addition to shopping, Jayne admitted to Andy Cohen that she gets Botox and fillers regularly. These treatments can cost more than $1000 per visit, according to Narcissista.me. She also works out with a personal trainer three to four times a week, has her hair and makeup done professionally whenever she’s working, and has a personal assistant.

Erika Jayne isn’t the highest paid Housewife on any of the Real Housewives shows. In fact, it is believed that she’s making significantly less money than someone like Bethenny Frankel, who reportedly makes a whopping $1 million per season of RHONY. But that doesn’t mean that Jayne isn’t making bank from Bravo.

According to Reality Tea, most of the Housewives on the Beverly Hills cast are making between $450,000 and $500,000 per season. The exception to that is Lisa Vanderpump, who very well might make the most money from Bravo overall (this is including her spinoff, Vanderpump Rules).

Averaging 20 episodes per season (including the Reunion shows), this would mean that Jayne makes about $25,000 per episode.

Erika Jayne and her husband live in a sprawling, 17,000-square-foot home located northeast of downtown Los Angeles in Pasadena. The mansion is complete with travertine floors, a library, and even a chapel.

The Girardis hired famed designer Joan Behnke to help decorate the inside of the home.

“We wanted to give the girl her dignity back. Downstairs was a restoration, upstairs was a remodel. I was inspired by Pasadena and what it was at that time, and I really wanted to keep the feel of the ’20s. I wasn’t going to put some modern twist on it,” Girardi previously told Pasadena Magazine.

Outside, the home features a kitchen area, expansive garden, and a space to host an intimate dinner party.

In 2015, Jayne leased a 1,600-square-foot apartment in Hollywood to use as her workspace.

“I was running my entertainment business out of my house, and even though it’s large, I had just so much stuff. It also became a Los Angeles traffic time issue. I needed a place where everything was central, where I could have my meetings in town, come here, shower and be out again,” Jayne told the Los Angeles Times in 2016.

Jayne also admitted that she didn’t go all out when designing and decorating the apartment.

“I wanted to keep things reasonable. We got pieces from Wayfair, Anthropologie and Lamps Plus. But I also love Murano glass chandeliers and anything from Kartell,” she told the outlet.

My pretties, we did it!!! #PrettyMess made it to the NY Times Best Sellers! I couldn’t have done it without each and every one of you?If you haven’t purchased your copy of #PrettyMess get it now in the #LinkInBio

Erika Jayne has a few hit singles under her belt. She started off in 2007, releasing a dance tune called “Rollercoaster,” which made it all the way to number one on the U.S. Billboard Hot Dance Club Play chart.

Since that time, Jayne has had six number one singles on the Billboard Dance Chart. According to Celebrity Net Worth, she “ranks with the Pussycat Dolls and Rihanna for the most number ones on a debut release.” The site goes on to add that Jayne’s music has been featured in films like The Watch, The Neighbor, and more.

Over the years, her music has been downloaded millions of times. Her music videos have been played just as much, if not more.

You can watch Erika Jayne’s video for “XXPEN$IVE” below.

In 2017, Erika Jayne appeared on Dancing With the Stars, earning her another paycheck. Although her exact salary is unclear, Gawker previously reported that the going rate for a “star” inking a deal to do the show is around $125,000. The site goes on to say that celebs who make it past the second week of competition earn even more money and that they are paid on a “sliding scale.” That report was from 2010, however, and it seems safe to assume that the pay has increased significantly over the years.

Most recently, Erika Jayne released her very first book, titled Pretty Mess. In March, the reality star revealed that the book had made the New York Times’ Best Sellers list, meaning that Jayne sold quite a few copies. That translates to a pretty nice payday, upwards of $270,000 per week (the book retails for $27) based on 10,000 copies sold.

5. She Moved to Los Angeles to Make a Life for Herself

Erika Jayne didn’t always live life in the lap of luxury. When she was a teenager, she worked as a go-go dancer and was forced to help her mom pay the rent.

At the age of 20, Jayne gave birth to her only child, her son Thomas, with her first husband, Thomas Zizzo. When her son was young, she left him in New York City with his dad in an effort to pursue a career in Los Angeles, according to People Magazine.

“It was the biggest risk I’ve ever taken… I was panicked, but I was committed to succeeding. And I knew he’d end up here with me eventually,” Jayne told the outlet.

She took a job as a cocktail waitress, while auditioning for jobs, and ended up meeting her now-husband, Tom Girardi. Although her life was pretty much made at that point, Jayne was determined to make a name for herself — and make her own money. And that’s exactly what she did. Her music career really took off, and now she’s doing it all on her own.

“I’ve worked very hard for everything I’ve ever had. But it’s my journey. And I don’t regret anything,” she told People. 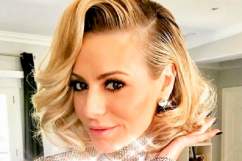 Dorit Kemsley Net Worth 2018: 5 Fast Facts You Need to Know