Tonight is the fifth in Hallmark’s spring movie series for March and April, Once Upon a Prince. Tonight’s movie premieres at 9 p.m. Eastern (8 p.m. Central) on Saturday, April 7, 2018. The movie stars Megan Park and Jonathan Keltz. After you read all about this movie and watch it, come back and share any comments or questions that you may have about the movie in our comments section below. Here’s everything you need to know about Once Upon a Prince. (To find out where the movie was filmed, see Heavy’s story here.)

To find out what channel Hallmark is on for you, click here to go to TV Guide’s listings. Then change the “Provider” (right under TV Listings) to your local provider. You’ll be able to scroll down to see what channel Hallmark is on for you. (To find out how to stream Hallmark’s movies live, see our story here.) If you miss the premiere, you can watch encores on Sunday April 8 at 7 p.m. Eastern, Saturday April 14 at 7 p.m. Eastern, Sunday April 15 at 3 p.m., or Friday April 27 at 8 p.m. Eastern.

Hallmark’s synopsis reads: “Susanna gladly accepts help one day from handsome stranger Nate in small-town Georgia. Sparks between them fly, but when a photo of them gets leaked to the press, Susanna is in for the shock of her life when Nate is called back home by his mother…for his coronation as the King Nathaniel of Cambria!”

Another synopsis by Hallmark reads: “Stranded with a flat, Susanna is lucky when Nate arrives, even though he’s never changed a tire. As they work together talking under the Lover’s Oak, a spark ignites. What Nate doesn’t mention is he’s Prince Nathaniel from Cambria and must marry a countrywoman.”

Megan Park stars as Susanna Truit. The Canadian born actress is well known for her roles on The Newsroom, Central Intelligence, and Charlie Bartlett. She was awarded the Rising Star from TIFF for her role in What If, alongside Daniel Radcliff. But she’s best known for her starring role on The Secret Life of the American Teenager, for which she won a People’s Choice Award and a Teen Choice Award. She wrote and directed the short film Lucy In My Eyes, wrote a pilot purchased by CBS Studios, and is now writing a feature for New Line-Warner Bros. with Shailene Woody as the star. She’s also directed music videos that received more than 50 million views, and is slated to appear in two feature films and other projects this year.

Jonathan Keltz stars as Nate/Prince Nathaniel. He is currently starring in a lead role on Cardinal, and also played Leith on Reign. He recently completed production as producer and a lead actor for Acquainted. His first acting role was on Degrassi: The Next Generation. His credits also include Cake, Breach, Entourage (playing Ari Gold’s assistant), Prom, 21 & Over, Necessary Roughness, Man Seeking Woman, Flashpoint, Leverage, Breakout Kings, and more. 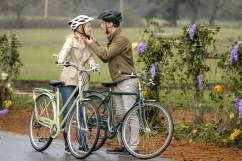 Where Was Hallmark’s ‘Once Upon a Prince’ Filmed? Where Is the Castle?