I swear your heart doubles in size when you have a child. Sometimes I feel like my heart may burst with joy. I love you, bud. ? #babyjroloff

Jackson Roloff is the 11-month-old son of Tori and Zach Roloff. The family is featured on the popular TLC show, Little People, Big World. The show is back for its 13th season, and will air on Tuesday nights at 9 p.m. Eastern.

Baby Jackson, lovingly referred to as “Baby J” by his parents, was born with achondroplasia, a form of dwarfism.

1. He Has Achondroplasia, the Same Type of Dwarfism as His Dad

Happy Father's Day Zachary. There's not a single person I'd rather being taking this journey of parenthood with. Seeing you with Baby J makes me fall more and more in love with you. Jackson and I love you so much and we can't wait for many more fathers days ahead! #zandtpartyofthree #storyofzachandtori

Jackson was diagnosed with achondroplasia, the same type of dwarfism that his dad, Zach, was born with. Although he was born at a healthy weight of 9 pounds, 1 ounce, and was 20.5 inches long, Jackson will be short in stature as he ages.

“People who have achondroplasia have abnormal bone growth that causes the following clinical symptoms: short stature with disproportionately short arms and legs, short fingers, a large head (macrocephaly) and specific facial features with a prominent forehead (frontal bossing) and mid-face hypoplasia,” according to the National Human Genome Research Institute.

Jackson’s grandparents, Amy and Matt Roloff, are both “little people.” Matt Roloff has diastrophic dysplasia, while Amy was born with achondroplasia. They have four children, Jeremy, Zach, Molly, and Jacob, only one of whom (Zach) was born with dwarfism.

The first time you hold your baby… nothing like it in the world. Can't wait to share Baby Jacksons birth story with you all tonight on @tlc ! I can't believe he's already almost two months old! ???? #zandtpartyofthree

Although the Roloffs didn’t know whether or not their son was going to be born with achondroplasia, they had a pretty good indication that he would, based on some of their ultrasounds.

On Season 12 of Little People, Big World, fans watched as Zach and Tori had an ultrasound and doctors told them that their son’s limbs were measuring below average.

“We went to the doctor yesterday — it’s not for sure, but all the limbs are measuring below average,” Zach told his mom, Amy, on the phone.

When Tori and Zach announced the birth of their son, they didn’t immediately reveal that he was born with achondroplasia. Zach revealed his son’s diagnosis in a vlog for TLC.

“He came in as an LP. He’s an achon, so he’s just like me. We’re super excited for it. We’ll hope to just give him a healthy, happy life and support him in every way. Hopefully he can experience as much of the world as Tori and me have been able to and hopefully much more. He may have to take two steps for everyone else’s one step, but hopefully we’ll be able to raise him in a way where that won’t stop him,” Zach said.

3. People With Achondroplasia Have Normal Life Spans, But Might Need Surgery Along the Way

Males with achondroplasia generally grow to be about four feet, four inches tall. Despite their short stature, people with this condition have normal life spans.

Although Jackson will need to have his height, weight, and head circumference monitored as he grows, there isn’t any specific treatment that he will need as he gets older.

People with achondroplasia can have complications, however. For example, Zach Roloff has had some health issues related to his dwarfism.

“I had to have leg straightening, so I had two casts on. Then I had to go back into surgery sophomore year of high school, they added screws to the leg,” Zach told his wife on a previous Little People, Big World episode.

Below are some other things that could affect Jackson as he gets older, according to the National Human Genome Research Institute.

“To help with breathing, surgical removal of the adenoids and tonsils, continuous positive airway pressure (CPAP) by nasal mask, or a surgical opening in the airway (tracheostomy) may be needed to correct obstructive sleep apnea. When there are problems with the lower limbs, such as hyperreflexia, clonus or central hypopnea, then surgery called suboccipital decompression is performed to decrease pressure on the brain.”

4. The Roloffs Are Very Patient With Jackson

Despite Tori and Zach knowing that their child had a 50-50 chance of being born a dwarf, Tori previously explained that the idea of having a child with dwarfism was “scary.”

“It’s a big deal. It is scary. No parent wants to hear that their child is different, no matter what. I think as a parent, it would be scary. If you didn’t know anything about dwarfism and you found out your child was a dwarf, that would be scary. There are certain things that come along with having an achondroplasia child that would be more difficult than having a child that was average height,” she previously said on LPBW.

Over the past several months, Tori and Zach have been patient and loving when it comes to their son. Both seem to be taking things one day at a time and making sure that Jackson is getting what he needs to thrive.

“The world is changing. People are more open to diversity. Whatever he wants to do, we’re going to find a way to help him do it. That’s our job in life now … it’s part of the whole package of who he is. He’s happy and healthy. That’s all that matters,” Zach Roloff told People Magazine last year.

“Jackson can wave hello and goodbye. He can find airplanes and lights. He has 8 teeth.
He wants to stand 24/7. Eats eggs (when he feels like it) and chicken. Still sleeps 11 hours,” her Instagram post read.

5. It’s Possible for Jackson to Have an Average-Sized Sibling

Happy first day of spring from this friendly! ? (ps I wish they had this emoji with blue heart eyes because that would be how I feel every day). ☀️????? #babyjroloff #gaplove

If Zach and Tori Roloff decide that they’d like to have more children, it is possible that their future children will be born without achondroplasia. If Tori were to get pregnant again, her unborn baby would have the same 50-50 odds at inheriting his or her dad’s dwarfism gene that Jackson had.

After all, both of Zach’s parents are “little people,” and only one of their children inherited the gene.

It is unknown how many children Zach and Tori want to have.  There have been plenty of rumors that Tori is already pregnant with her second child, but she has taken to social media over the past few months to set the record straight.

Interestingly, while dwarfism might run in the Roloff family, Zach’s brother, Jeremy, and his wife, Audrey, welcomed their daughter, Ember Jean, who was not born with dwarfism, last year. 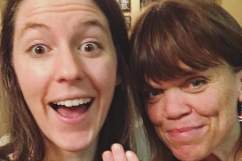