Tonight, snowboarding fans will catch a familiar face on the Dancing with the Stars premiere. Olympian Jamie Anderson will be hitting the stage to strut her dancing skills for the first time on live television. Those who are familiar with Anderson and her family may be aware that she has a sister who is also a fellow snowboarder who raked in some very impressive titles in her day.

1. She and Her Sister Became the First Siblings to Win at the X Games

Joanie was 21 when she triumphantly brought home the Snowboarder X gold medal. Jamie, meanwhile, was 16 when she became the youngest female ever to win an X Games Slopestyle competition.

Speaking to ESPN, Joanie says, “The entire family was in Aspen to support us, so it was a huge celebration… We won within moments of each other. Our family was literally running back and forth between the slopestyle and boardercross courses to watch us. Jamie won first, then the family ran over to the boardercross venue just in time to watch me win.”

At the 2014 Winter Olympics in Sochi, Jamie took home the gold medal in the Women’s Slopestyle Event. She was able to do the same at the 2018 Winter Olympics in Pyeonchang, South Korea, which made her the first female snowboarder to win more than one Olympic gold medal.

Joanie and Jamie shared many interests, but never considered themselves direct competitors.

Joanie tells ESPN, “There has never been any sibling rivalry, just support… We were never against each other, only with each other.”

Joanie cites 2007 as one of her most memorable years both as an individual competitor and a team competitor, boarding alongside her sister. Speaking about boarding against her sister in their younger years, Joanie tells Time, “She knew how to push buttons… She wasn’t about to be lost in the mix. Her younger brother, Joey, calls Jamie a “f–king boss, man.”

3. Jamie & Joanie Have Six Other Siblings

On this day last year I said yes. ❤️ #alifetimeofadventurestocome

Jamie and Joanie have six other siblings– four brothers and two sisters.

Speaking about the whole family snowboarding, Joanie shares, “We were constantly challenging and pushing each other at home and on the mountain… I think it’s where we all got our competitive drive. Stacie, Jamie and I grew up on the snowboard team together. If one of us learned a new trick, the other two wouldn’t be far behind.”

4. Joanie Was There for Her Sister at the Sochi Olympic Games After a Bad Practice

In an interview with NBC, Jamie was asked what her earliest memory of snowboarding is. She says, “I grew up watching my sisters and seeing kids at the local mountain hit jumps. After I hit my first jump, I knew this was something I was going to pursue.”

Joanie has always been supportive of her sister, and tells ESPN that Sochi was no different. “In Sochi, Jamie had a rough practice run and the family could tell she was dealing with some heavy emotions… Everyone was like, ‘Joanie, go down there. Jamie needs you!’ That was a special moment.”

Jamie acknowledges what her sister has done for her. She tells the outlet, “We inspire each other to go to yoga more often, eat healthy, work out, and follow our dreams and passions.”

5. They Grew up with No Traditional Schooling & Didn’t Watch TV

Happy birthday to the incredible woman that the eight of us are blessed to call our mom! Love you @andersonlaurenn ?

Jamie and Joanie were raised without any traditional schooling. The kids were also not allowed to watch TV.

Speaking to Today.com, Lauren Anderson said, “I wanted them to be like children, playing outside, running and jumping and not sitting inside at a desk… They got to be free, building their bodies, protecting their spirits and minds, and not being pushed or pressured.”

The girls’ mother homeschooled her eight children while running a lawn-mowing business on the side, according to Today.

“They went on the mountain and skied and snowboarded and they took the bus, and then they came home and did schoolwork — just to make it official,” Lauren Anderson said. “There wasn’t a big push for them to read and write and do arithmetic. I wanted them to learn how to get along and let life be the teacher. Character-building was more important than academics.” 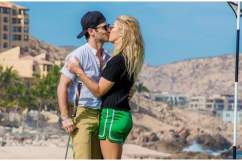