Sara Bareilles made a name for herself with her hit “Love Song” and went on to garner Tony Awards attention for the Broadway show “Waitress”. Now, she takes on the role of Mary Magdalene for Jesus Christ Superstar Live. When she is not appearing on stage or in front of large audiences, Bareilles spends time with her boyfriend, Joe Tippet, according to Just Jared Jr. Get to know more about Tippet and his relationship with Bareilles below.

1. The Couple Were Co-Stars In “Waitress”

Super proud wing woman to @joetipps for his @nbc premiere of @nbcrise. The I goes Up!! |Dress @katespadeny | Styled by @mrmontyjackson

According to Just Jared, Tippet and Bareilles met while working on the Broadway show “Waitress.” On the show, Bareilles wrote the music and lyrics, in addition to appearing as Jenna. Unfortunately, Bareilles has ended her role as Jenna. Tippet actually didn’t make it into the original cast of the show and was appearing in an out of town try out for the show in Massachusetts prior to taking over the official Broadway role of Earl.

In addition to appearing in “Waitress,” Tippet has been in other Broadway productions, including “Airline Highway”.

2. Bareilles Is Grateful for “Waitress” Because of Tippet

Oh my peeeeeeeeeps! ???I love you so much! Thinking diner thoughts today while walking in biblical sandals. ??????@waitressmusical @nbc @jesuschristsuperstar

One of the reasons that Bareilles is grateful for her success with “Waitress” is because it brought her to Tippet. In an interview with People, Bareilles gushed that, “My life is so different because of ‘Waitress.’ The people that I’m close to, the things I do professionally, my colleagues, my best friend and my boyfriend, like all of these things have come to me because of the show. And it’s really beautiful.” 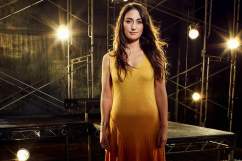 3. Tippet Is an Actor on the Show “Rise”

Tippet plays the role of Coach Strickland on NBC’s hit show Rise. In recent weeks, Tippet was spotted at the premiere party for Rise with girlfriend Bareilles. Other shows that Tippet has appeared on include The Blacklist.

Finally back in America. I was the only person on my flight pulled for secondary screening and a full bag inspection, replete with invasive questioning. I can't imagine why?! #itsthebeard #twomonthsinSEasiawithonlyacarryon #ilookcrazy shout out to the fine men and women of SFO CBP! Great way to come home! #DrRichardKimble #ididnotkillmywife #idontcare #hehadacosmetichand #theonearmedman #youfindthisman #shouldiquotethewholemovie

According to Whos Dated Who, Sara Bareilles was previously romantically linked to Javier Dunn. Dunn is also a musician, according to his website, and his official bio on his site describes him as, “a singer/songwriter/multi-instrumentalist/producer from the San Francisco Bay Area who currently calls Los Angeles home. As a member of several bands, he has toured the world extensively and performed on a variety of stages, from The Hotel Cafe to Madison Square Garden to The Tonight Show, and just about everywhere in between. His original music has been featured in film, tv and commercials and his songs are currently licensed by Secret Road Music Services. He maintains his own publishing under the moniker Fair Enough Music (ASCAP) and releases new music on his own label Fair Enough Records. As a solo artist, Javier has released 10 full length albums and one EP, with eight albums being released in 2016 alone.”

5. Tippet Took Over His “Waitress” Role for Will Swenson

Big fan of this coach, @joetipps, AND the show he’s on. @nbcrise is on tonight at 9pm…it has heart and music and the people who are making this show are wonderful humans….new favorite Tuesday night. #nbcrise

Will Swenson’s take on the character of Earl for “Waitress” was taken over by Tippet after his run with the role, according to Playbill. Swenson has a long list of Broadway roles under his belt, including shows such as “Les Miserable”, “Hair”, and “Disaster!”