John Legend is the star of Jesus Christ Superstar Live and a Grammy-winning musician. He is also married to a famous Sports Illustrated model and television personality, Chrissy Teigen. The two are often posting videos and photos of their home life together on Snapchat and Instagram, giving fans an inside look at their love for each other. The couple dated for 4 years before Legend proposed to her in 2011. The two then married on September 14, 2013, in Como, Italy. Get to know more about the couple, their relationship and the family they are continuing to build together.

1. The Couple Had Difficulty Getting Pregnant

Teigen and Legend have one daughter together, a little girl named Luna. According to the NY Daily News, Teigen suffered from postpartum depression after the birth and she admitted to Glamour that she also suffered anxiety as well. The couple did not have an easy road to getting pregnant with Luna, as Teigen wrote on Instagram in her pregnancy announcement in 2015 that, “As many of you know, we’ve been trying to have a baby for a while now. It hasn’t been easy, but we kept trying because we can’t wait to bring our first child into the world and grow our family. We’re so excited that it’s finally happening. Thank you for all your love and well wishes. I look forward to all the belly touching!” Fortunately, the couple was able to battle through their fertility issues. Luna was born with the help of IVF treatments.

2. Teigen Received a Lot of Criticism Over her Second Pregnancy

Prior to getting pregnant with her second child, Teigen caught heat from a Twitter user, who criticized her for saying her next child would be a boy, according to Glamour.

Currently, Teigen and Legend are expecting their second kid together.

3. Legend Wrote His Song “All of Me” for His Wife

Legend and Teigen first met on the set of his 2007 music video for his song “Stereo” and from there, the two formed a relationship. As time went on, Legend married Teigen and he ended up writing the song “All of Me”, which was dedicated to her.

4. Prior to Their Wedding the Couple Tied the Knot at City Hall

Even though the power couple had a big wedding in Italy, they first got married at City Hall. According to the NY Times, “Chrissy and John legally hastily got married at City Hall because they didn’t realize they would need to bring a marriage license to their wedding in Italy.” Teigen admitted that, “I didn’t know that we would have to do the traditional vows. I was ready to just sign a piece of paper. But when it actually happened and I was up there, I started crying, of course.”

Over the years, the couple has had their ups and downs, even combating cheating rumors, but Teigen told Us Weekly she will never leave her husband. She explained that, “I don’t know who else could put up with all the shit we are constantly dealing with … I told him the No. 1 reason we are not getting divorced is because I refuse to see another woman with my baby.” 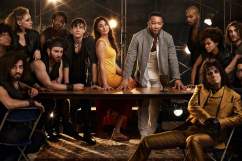