Kenya Moore, 47, has said for years on Real Housewives of Atlanta that she wanted to have a baby. Even when she wasn’t in a relationship, she said that she wanted to try to have a child. Now, Moore is married to entrepreneur husband Marc Daly and took RHOA viewers on a trip to the gynecologist this season, where she discussed the possibilities of her getting pregnant. Recently, on the RHOA After Show, Moore said that, “You know, listen, we have been really up front about wanting to expand our family, and we have definitely been taking the proper steps to try to make that happen.” And, according to Bravo, Moore also said that she and Daly are trying to decide whether to reside in Atlanta or New York. Moore explained, “I think it just depends on [what] the next nine months might look like and what kind of room we’ll need and where we’ll be in terms of that. So we’re figuring it out, but it just depends on where our family, the number in our family, will be in the future.” Moore lives in Atlanta, while Daly owns a restaurant in New York.

Tonight is part 1 of the Real Housewives of Atlanta reunion and there was said to be a reveal or announcement of some kind. Well, at the start of the reunion, Moore makes her pregnancy announcement. Fellow housewife Eva Marcille is also pregnant right now, so fans will have to wait and see what comes up with that as well. The Grio has reported that Moore does confirm her pregnancy on the reunion.

Bravo TV reported rumors that Moore underwent IVF treatments at a fertility center in Barbados. And, in November, Moore was spotted leaving a fertility clinic, according to Extra TV. Love B Scott has stated that Moore is due by the end of the year and she confirmed it on the show’s reunion.

Previously, at an Oscars after party, Moore told Us Weekly, “We appreciate people rooting for us and wanting the best for us.”

On June 23, 2017, many fans were surprised to hear that Moore had tied the knot with Daly> Just 10 people were in attendance. Even Moore’s father was not invited, though Moore says she regrets that decision. In an interview with The Grio, Moore admitted, “It was sad. I knew my dad wanted to be there and I tried to tell him. I just wanted my wedding day to be perfect and with my dad you never know what you’re going to get. I told him how in love I was with this man and he was not supportive. I had to make the decision and I went back and forth about, ‘do I have my dad there?’ I had to make the decision because I’m starting a new life and my family now is my husband. I went with the safer choice and I do regret it.”

Though Moore admitted to not wanting her father at her wedding, she first told People that he was celebrating his birthday in Jamaica and that the nuptials were last minute so he couldn’t make it. In her father’s place, her friend Brandon DeShazer walked her down the aisle, at a private resort in St. Lucia. Moore opted for a beach ceremony.

Recently, Moore said that her husband helps her in all aspects of her life, explaining to Us Weekly that, “He doesn’t focus on my job. He focuses on me, my business. He has an MBA, he helps me with Kenya Moore Haircare. Advice. Tactical things. That’s the best thing about being married to someone like him. I have a partner in love, life, and business.” Moore also added that, “We’re really blessed right now, I just have to focus on my family.” 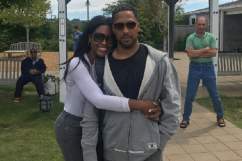