The robot on Netflix’s 2018 Lost in Space is very different from the robot from the original series. But don’t worry — you won’t be disappointed. This new robot is beautiful, intriguing, and brings a lot of mystery. And his relationship with Will creates a compelling plotline. After you read this story, take our poll at the end and let us know what you think about this big change in the Netflix series.

In the original series, the robot was a Class M-3, Model B9, General Utility Non-Theorizing Environmental Robot. He was designed by Robert Kinoshita, who also designed Robby the Robot for the 1956 Forbidden Planet. He was very close to Will Robinson, often warning him of danger. He had futuristic tech and weaponry, and sometimes seemed capable of experiencing joy and sadness. He was part of the Robinson family from the start, but he was sabotaged by Dr. Smith to play a role in the crash of the Jupiter 3.

The Netflix robot is very different in many ways. He still has a close relationship with Will and will still warn him of dangers. He still sometimes seems to have emotions. But his origins are very different. The following are minor spoilers from the pilot. In this series, the robot isn’t from Earth at all. It appears that his ship also crash-landed on the planet, just like the Robinsons’ Jupiter 3. He’s either an alien species or was created by an alien species; it’s tough to know. He’s far more mysterious than the original robot, and really helps drive the plotline forward.

What secrets lie inside the Robot's ship? #LostInSpace pic.twitter.com/Xe2vs0GOGN

As far as design, the new robot is like a transformer on steroids. The starry sky reflected in his helmet is beautiful and seems to hint at a deeper intelligence. He’s perfect for a 2018 series, and really fits with the idea of being alien and beyond Earth’s capabilities. Meanwhile, the robot on the original series was pretty simple overall in appearance, which fit with the fact that he was an Earth-designed model.

But there’s one thing the Netflix robot brings from the original series that was absolutely required: “Danger Will Robinson.” I don’t think anyone would have been happy if he wasn’t saying this very important line (which was likely why the producers included it in the trailer.)

Wow! The "Lost in Space" robots have sure gotten scarier since 1965! #DangerWillRobinson pic.twitter.com/9Rx2Lsu8Dx

What do you think of the new robot as compared to the original series robot? Take this poll and let us know. 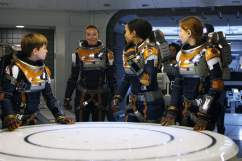