The new Netflix series Lost in Space is fascinating to watch. It’s written to be family friendly, but it presents enough intrigue, mystery, and beautiful sci-fi effects to make you want to binge more than one episode at a time. But almost halfway through the series, the story takes a darker turn, and now fans are wondering about a certain discovery and what it might mean. This post has major spoilers for the end of Episode 5 of Lost in Space on Netflix, and also includes major spoilers for Episode 6.

At the end of Episode 5, Maureen takes a fantastical hot air/weather balloon type journey into space, so she can better observe the sun and understand why the seasons are changing so fast. This part does require a slight suspension of disbelief, to accept that her weather balloon has taken her all the way into space, orbiting the planet outside the atmosphere. But what she discovers troubles her greatly. After taking some readings, she realizes that Hawking radiation has been detected. But what is Hawking radiation?

Hawking radiation is currently theoretical. It refers to blackbody radiation that is predicted to be released by black holes because of the quantum effects that happen near the event horizon. Stephen Hawking first argued for the existence of Hawking radiation in 1974, thus the radiation’s name. Black holes have immense gravitational attraction. The classic idea is that the gravity is so powerful that nothing can escape. Hawking showed that black holes can emit black body radiation and thus “glow” slightly. Hawking radiation would consist of photons, neutrinos, and perhaps other particles. The idea was that black holes can affect the production of matching pairs of particles and anti-particles, but if this happened outside the event horizon, it would be theoretically possible for the positive member of the pair to escape and the negative member of the pair to fall back into the hole, causing the black hole to slowly lose mass. The subatomic particles would be emitted until the black holes exhausted their energy and evaporated completely, Physics of the Universe noted. The idea is that a black hole might radiate away its mass in certain situations, shrinking and ultimately dying “like a hydrogen bomb,” UCR explains.

It’s all pretty complicated, but Wikipedia has a great article about how it works here. UCR also explains the concept here. And Physics of the Universe’s story is here. Scholarpedia has a good article here.

The bottom line is that Hawking radiation will always indicate a black hole is nearby. And that is never a good thing. 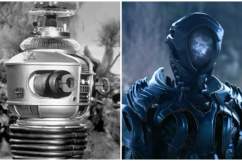 ‘Lost in Space’ Robot: The New Netflix Robot vs. the Original [PHOTOS & POLL]

Read More
Lost in Space, Netflix, TV
What is Hawking radiation and what does it mean? Read on for more details, but heed the spoiler warning first.