When it comes to where the cast members are in their personal lives today, some of them are married and have kids. Deena Nicole Cortese is married to Christopher Buckner, Jenni “JWoww” Farley is married to Roger Mathews and Nicole “Snooki” Polizzi is married to husband Jionni LaValle.

Viewers got to see Farley’s husband Mathews on the premiere episode of Jersey Shore: Family Vacation, but Cortese and Polizzi’s husbands were not on the premiere. Instead, viewers got to see Cortese’s mother and Polizzi’s kids. It has not yet been reported if Cortese’s husband will appear at some point on the show this season, but Jionni LaValle has issued a statement, saying he will not film. LaValle wrote an explanation on Instagram, saying that, “I am CHOOSING TO NOT be on TV because I simply DO NOT like it … Nicole and I are doing great and became even stronger together while raising our kids. HOWEVER you will not see me on her reality show. Being a reality star was never something I wanted to be when I grew up.” He continued, “I own my own business and work hard at it, that’s what I do. MY wife is a reality star and works hard at that, that’s what she does. We ARE not divorced. For the HATERS I hope this message find you and confuses you even more about life and for the FANS of my wife and her show…I got your back!!! God Bless Yas!”

LaValle and Polizzi first met on the original Jersey Shore. LaValle actually showed up with a family member to retrieve a female cousin from the cast’s house. Down the line, LaValle met Polizzi at a club while filming and the two hit it off. Their many ups and downs were shown on national television and then the two got pregnant, which was a surprise to them both. Polizzi and LaValle filmed spin-off shows and put the birth of their first born, son Lorenzo, front and center. They continued to grow their family and also have a young daughter named Giovanna.

Because LaValle wasn’t going to appear on the show, the divorce rumor mill started to churn, but his explanation about why he wouldn’t appear set the record straight, according to the E! network. And, after LaValle expressed himself online, he was met with loving comments from Polizzi, who said, “I love you beyond words & so lucky to have you. As long as we know what we have, screw everybody else. You’re my world!”

Radar Online previously reported that, in 2015, LaValle was allegedly linked to an Ashley Madison account less than a year into the couple’s marriage. The site is a means for married people to cheat and have affairs. At the time, Polizzi defended her man to Entertainment Tonight, saying, “It’s so stupid, and we honestly think, like, someone is trying to f**k with us because this isn’t the first story that Jionni’s been cheating on me. But all these stories never have evidence. There’s never a photo, there’s never text messages, there’s nothing … If he wanted to cheat on me, he would go to a club and cheat on me, or go out and cheat on me. He wouldn’t go on Ashley Madison to pay money to cheat on me. Like, he’s not an ugly guy. He’s beautiful, do you know what I mean? He would never do anything to ruin his family, and if he didn’t want to be with me he would tell me.”

Fortunately, whatever the case is, the couple appear to be happy and healthy today. On Jersey Shore: Family Vacation, Polizzi gushes over her love for her husband and children. 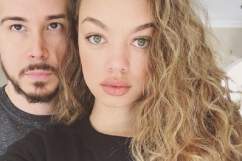 Read More
Jersey Shore, Reality TV, TV
Nicole "Snooki" Polizzi has returned to Jersey Shore and her kids have appeared on the show as well, but husband Jionni LaValle has said he won't be filming.