Nicolle Rochelle was taken into custody outside of a Philadelphia courthouse on Monday, April 9, after she lunged at actor Bill Cosby. Rochelle, who also goes by the name Nicole Leach, was topless and had the words “Women’s Lives Matter” drawn on her body.

Rochelle is an actress from New Jersey. She started her television career in the 90s and has about a dozen credits to her name. She currently lives in Paris and performs in various shows in Europe as a singer and a stage performer.

1. She Has Been Charged With Summary Disorderly Conduct

According to the New York Post, Rochelle “hurtled over a barricade around 8:35 a.m. and ran toward the disgraced comedian, her right fist in the air, outside the Montgomery County Courthouse in Norristown, Pennsylvania.”

Sheriff’s deputies on the scene were able to grab Rochelle before she came into contact with Cosby. She was arrested and charged with summary disorderly conduct. Rochelle is not looking at jail time, but she “could be fined” according to the report.

In pictures obtained by the Daily Mail, Bill Cosby can be seen laughing while police took Rochelle into custody.

“The main goal was to make Cosby uncomfortable because that is exactly what he has been doing for decades to women and to show him that the body can be aggressive and empowered,” Rochelle said after the incident, according to NBC New York.

2. She Also Posted About the Cosby Accusations on Social Media & Is Starting a Non-Profit Organization

This isn’t the first time that Nicolle Rochelle has spoken out about Bill Cosby and the allegations made against him. Before taking to the streets, Rochelle took to social media to share her feelings on Cosby and his alleged treatment of women over the years.

“In honor of the first day of the Bill Cosby retrial, I went by the address where they filmed The Cosby Show exterior in New York City…LET’S HOPE JUSTICE WILL FINALLY BE SERVED,” she captioned a photo of herself. The picture (above) showed her standing on the front steps of a home wearing a white zip-up hoodie that read “Hello Friend” with the word “Friend” crossed out and replaced with “Rapist.”

Although Rochelle isn’t very active on Twitter, she did respond to another user’s comments about Katy Perry kissing a contestant on American Idol last month.

“Why is it not considered sexual harassment for Katy Perry to kiss a contestant who did not ask for it. There is a double standard here with liberals yet again,” a Twitter user wrote, along with the hashtag #metoo.

“WHO EXACTLY TOLD YOU THAT ALL LIBERALS SAID THIS WAS NOT SEXUAL HARRASSMENT (sic) AND WAS OKAY?! GET YOUR FACTS STRAIGHT BEFORE SPREADING YOUR (obviously non-liberal) PROPAGANDA!!” Rochelle responded.

According to her biography written for Issuu, Rochelle is starting a non-profit organization.

“Touched by the difficulties and injustice faced especially by the little girls and women of the world, Nicolle is currently developing this non-profit organization which is linked to her solo project (hence the unorthodox spelling of GEAIsha) with the goal of spreading awareness about these issues and ultimately helping to get education and human rights protection for females, both women and children, no matter what country they happen to be born in.”

Ok i put a filter even though it was so unneccessary! Lol pic.twitter.com/nwzK3nQxpy

In 1990, Rochelle landed a role on The Cosby Show. Although her part was small, she made four appearances from 1990 through 1992.

Rochelle got her start on The Baby-Sitters Club. She played the role of Jessi Ramsey in 13 episodes of the series, adapted from the popular children’s book franchise, in 1990. From 1989 through 1991, she starred in Shining Time Station, in which she played the role of Tanya in 22 episodes.

Over the course of her career, she has landed small roles on popular television shows including Clarissa Explains It All, NYPD Blue, and Law & Order. She has also been in a couple of movies, like Shining Time Station (1989), Tales from the Darkside: The Movie (1990), and Someone Like You… (2001).

Her last credited appearance came in 2013 when she played the role of Nurse Hydrotherapy in the television series Jo. She has not been in any television shows or movies since that time, according to her IMDb page.

4. She Is a Singer & Has Done Theater

In addition to appearing in various television shows and movies over the years, Rochelle is also a talented musician. In March, she shared a video of herself performing in Modern GEAIsha, which took place in Austria. You can watch that video below.

After she graduated from college, Rochelle starred in the play Limonade Tous les Jours alongside Alan Alda. She later starred in Looking for Josephine, joining the touring troupe for four years and performing all over Europe, according to her bio in Issuu.

She performs in both French and English.

5. She Is Dating Damien Marin & Lives in Paris

According to her Facebook profile, Rochelle grew up in New Jersey and attended Montclair High School. After she finished high school, she enrolled at Brown University in Rhode Island, where she studied linguistic anthropology.

Although she was in Philadelphia on Monday, April 9, Rochelle’s Facebook profile indicates that she currently resides in Paris, France. Her bio also reveals that she is in a relationship with Damien Marin, who hails from France. 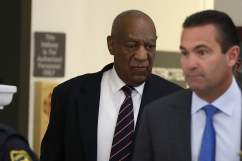