All of last season’s cast members from Real Housewives of New York City have returned for season 10. Some of their lives have been turned upside own since viewers last saw them, while others are doing better than ever. Let’s give you the rundown on the 2018 taglines for each RHONY housewife, along with some spoilers and background on what to expect from them this season.

Last season on RHONY, Luann De Lesseps faced the firing squad over her relationship with Tom D’Agostino. The ladies were weary of D’Agostino, and apparently, they had good reason. Cheating allegations continued to come out and suspicions arose, but De Lesseps was determined to stick by her man. The couple walked down the aisle with only one current housewife, Dorinda Medley, invited to the Palm Beach event. Unfortunately, Bravo reported that the couple’s marriage came to an end after 7 short months. On an episode of Watch What Happens Live, De Lesseps admitted that, “I didn’t see all these red flags. It’s different in that perspective on the show … all things piled up.”

When De Lesseps married D’Agostino, she gave up her countess title and now she’s on her own. To make matters worse, this past Christmas Eve, De Lesseps got into a drunken altercation, which resulted in an arrest and a stint in rehab. The NY Daily News reported that De Lesseps was charged with “resisting an officer with violence as well as misdemeanor charges of trespassing and disorderly intoxication.” This season on RHONY, fans will get an inside look at De Lesseps’ divorce, her arrest, and rehab.

Bethenny Frankel – “It’s great to be successful. But it’s even better to B Strong.”

Bethenny Frankel has been through the ringer over the past few years, between the stalking charges against her ex-husband Jason Hoppy and all her business ventures. She also deals with the death of her beloved longtime dog Cookie this season on the show. The death occurred when Frankel and her daughter were at her Hamptons home.

Recently, Frankel has been starring and appearing in other hit reality shows. She has been a “shark” on Shark Tank and even co-starred with Fredrik Eklund on the Bravo home renovation show Bethenny and Fredrik. Perhaps this is why Frankel got a “better contract” than her fellow housewives, as reported by CNBC. When speaking with CNBC about her contract, Frankel recalled, “I’m a good negotiator. In the first season of Housewives, I made $7,250 for the entire season, but was the only person to put in my contract [that] anything I ever do, I own … And that ended up being a pretty good thing when it came to Skinnygirl.” She said that her initial contract, which she refused to sign, had a clause that Bravo would receive a percentage of any business Frankel promoted on the show.

When it comes to Frankel’s tagline, it refers to her B Strong charity, which has been helping out victims in Puerto Rico. This will be a focus for her on this season of RHONY.

Dorinda Medley – “I have a big heart, but little patience.”

Dorinda Medley is still with longtime boyfriend John Mahdessian, but this season, Medley may be looking beyond the relationship. She is also hoping to break away from her past and start anew, just like a couple of the other cast members. She also tries to patch things up with friend-turned-foe Sonja Morgan.

According to Bravo, Medley and Mahdessian recently celebrated their six-year anniversary. Over the years, Medley has been asked why she doesn’t marry Mahdessian and, though she says they are in a “very committed and monogamous relationship,” she’s not rushing to walk down the aisle.

This season on RHONY, Morgan is enjoying life and up to the same tricks, as NBC writes that, “Sonja is trying to get her life back on track after a summer of detoxing and distancing herself from the women, but old habits die hard and her feud with Tinsley is alive and well.”

Ramona Singer – “Age is an issue of mind over matter: If you don’t mind, it doesn’t matter!”

Ramona Singer will always rub some people the wrong way, and she continues to do so, try as she might to win the affection of others. Singer is still trying to charm her way back into Frankel’s life, but it’s definitely a difficult path. At the same time, Singer is redecorating her Hamptons home and continues to move forward with her life since her split from ex-husband Mario.

According to Us Weekly, Singer has said that she wasn’t in as good of a place during season 9 of the show, but now she’s back to the old Ramona. She also said that even though all the women fight, they come together whenever any one of them needs it. Singer explained that, “We can all have our ups and downs, we all have our little fights and skirmishes, our little tit-for-tat. But when anything really bad happens to one of us, we all rally around and we definitely all rallied around Luann.” She’s referring to De Lesseps’ divorce, arrest and rehab stay.

Carole Radziwill – “In the marathon of life, loyalty is everything.”

This season on the show, Carole Radziwill is prepping for and running the New York City Marathon. As a woman who advertises the fact that she hates to exercise, this is a major feat. Unfortunately, some of her relationships are falling apart. For years, Bethenny Frankel and Carole Radziwill have been very close friends. This season, however, they begin to drift apart. Frankel doesn’t appear to show support for Radziwill’s athletic adventure and the two start to butt heads. When it comes to this split in friendship, fellow housewife Singer weighed in to Us Weekly, saying that, “The fact that there as a wedge that has come between Bethenny [Frankel] and Carole [Radziwill] kind of affected the whole ambiance of the show. And all of a sudden this season, I’m like really close to Dorinda [Medley] and Carole.”

Another issue that Radziwill deals with is the end to her relationship with her boyfriend Adam Kenworthy. Last season, Radziwill felt that it was best to have a little space in their relationship, so she had Kenworthy move out of her apartment, but the two continued to date. On an episode of RHONY this season, Kenworthy tells Radziwill that he went out on a date and likes the girl he went out with … Eventually, the couple broke up, as is reported by Page Six.

Tinsley Mortimer – “Come on, why cook when I can order room service?!”

For Tinsley Mortimer, this season, she is still living in a hotel, and her finances come into question because of fellow housewife Sonja Morgan. Last season, she was set up with Scott Kluth by Radziwill and Kenworthy, but the couple hits a rough patch and fans have a front row seat to the toll it takes on Mortimer. According to Page Six, Mortimer and Kluth split in October 2017. 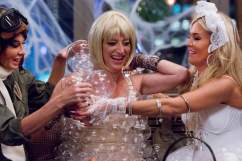