Tonight, Wednesday, April 18, is the long-awaited musical episode of Riverdale. The musical is going to be based on Carrie, and there have been quite a few rumors that we might lose a character tonight. It’s not known if this is really going to happen, but fans are very nervous about the rumors and will likely be watching live if they can. Here is everything you need to know about how to watch Riverdale tonight.

AIR DATE & TIME: The Riverdale musical episode airs tonight, Wednesday April 18, at 8 p.m. Eastern (7 p.m. Central) for an hour. (No, fans won’t get to enjoy an extra-long episode for the musical. Riverdale episodes typically last exactly an hour.) If you miss the episode, you can watch it later on The CW’s website or app. Or visit Heavy’s story here for more details about watching a live stream.

TV CHANNEL FOR RIVERDALE: To find out what channel Riverdale is on for you, click here to go to TV Guide’s listings. Then change the “Provider” (right under TV Listings) to your local provider. You’ll be able to scroll down to see what channel The CW is on for you.

OFFICIAL SYNOPSIS: Tonight’s episode, “Chapter Thirty-One: A Night to Remember” is a musical episode based on the Stephen King classic Carrie. The episode is called “A Night to Remember.” Here’s a synopsis from The CW: “As Riverdale High begins rehearsals for its upcoming production of Carrie the Musical, the arrival of an ominous letter forces director Kevin (Casey Cott) to make a difficult decision about the show. Jughead (Cole Sprouse) uses his cover as the musical’s documentarian to solve the mystery behind the letter. Meanwhile, tensions between Betty (Lili Reinhart) and Veronica (Camila Mendes) continue to escalate just as Alice (Madchen Amick) announces she is joining the musical to spend more time with Betty. Elsewhere, Hiram (Mark Consuelos) enacts a devious plan to further drive a wedge between Fred (Luke Perry) and Archie (KJ Apa), while Cheryl (Madelaine Petsch) channels Carrie White during a showdown with her mother.”

Some fans haven’t been too excited about the latest plotlines involving real estate scandals and private prison purchases. So we’re hoping that tonight’s will bring back the Black Hood drama, and maybe a little less weird, creepy Chic stories. In the musical, Veronica will be playing the “mean girl,” Chris; Betty will be playing the “good girl” Sue; Archie will play the love interest, Tommy; and Cheryl will be playing Carrie, of course.

Cole Sprouse told E! News about the episode: “I think it’s gonna be a breath of freesh air, honestly. Because our show is really intense and it can be kind of debilitating in terms of how heavy things get for these characters, and here’s an episode where everyone’s jovial for a moment in time and it’s fun, and we still manage to take ’em back down.” 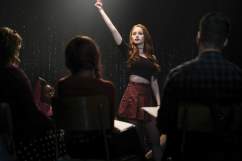 Read More
Riverdale, The CW, TV
Here are all the details on what time the Riverdale musical episode starts and what channel it is airing on tonight.