The 2018 series finale of Scandal has aired and with the underground spy group B613 out in the open, all bets are off. The Gladiators stand up in the name of their country, facing the music in hopes of positive change for the nation. For years, Olivia Pope and her fellow gladiators have committed countless crimes, from treason to murder, but Pope has made the decision to bring all of the corruption and “scandal” to light. Showrunner Shonda Rimes explained to The Hollywood Reporter that, “It’s always been my contention that the Oval Office, in our show, was a place that corrupted anybody who came near it and the closer you came, the more corrupt it made you and the more damaged it made you. Olivia started out as the character that we knew who has very much believed in how important this particular kind of power was and how molding it and being a part of it was — and we watched her, like everybody else, become absolutely corrupted by it, and make all the same mistakes that everybody else makes to get what she wants from it.” Now, Pope has decided to stand up for the greater good, no matter what it costs her, and her allies are standing beside her.

Tonight, Pope and her allies testify and reveal all that they know about B613. But, before we get into details, beware of major spoilers from the finale below.

In an interview with The Hollywood Reporter, Rhimes opened up about what Pope does on the finale and she also discusses the cast paying for their wrongs, explaining that, “One of the things that Olivia says in the penultimate episode is this idea of standing up and being somebody who puts everything out in the open is important. Whether or not everybody pays for what they’ve done, I don’t know that that’s what the finale is about as much as it’s about seeing what happens once that choice has been made. We’ve put them in a fairly impossible position and you get to find out what happens and how that gets solved and where our characters go from there.”

Rimes then added, “We’re finishing the evolution of the character of Olivia Pope. The story is being completed and you’re going to find out what happens. Yes, the story is wrapped up and, yes, the audience gets to imagine some of what happens next for the character.” Actor Tony Goldwyn, who plays Pope’s love interest, Fitz, said that the show’s ending will be “really satisfying,” according to Newsweek.

Additional spoilers about tonight are that Mellie and Marcus may end up together. This morning, a clip from the finale was presented on Good Morning America and it showed the two in what appears to be an “almost kiss”. Mellie tells Marcus that she’s been afraid “to be here with you.” The two DO end up kissing on the finale and they wind up together. Another major spoiler is that Lonnie kills himself in the first two minutes of the finale so that Pope can speak before a senate committee. Another death occurs with the murder of Attorney General David Rosen. Cyrus Beene suffocates him to death. Pope ends up trying to get Beene to resign and he agrees.

Another spoiler is that Quinn marries Charlie in jail and she finds out his real name is Bernard. Charlie ends up getting out of jail and is reunited with the couple’s baby. And, it looks like Liv and Fitz get their happy ending.

But, actress Katie Lowes, who plays the role of Quinn Perkins, told Refinery 29 that there is so much more to the finale than just the ending. She stated that, “I think that will be a legacy … having a female president, a female chief of staff, having Quinn Perkins running Quinn Perkins And Associates as a pregnant woman. The powerful, strong, three-dimensional, really complicated women roles on this show will be a legacy.” Lowes also said that what she loved about Scandal was it dealing with issues going on in America today.

Also on the finale, what would a truly gripping episode be without Papa Pope? Olivia Pope sits down with her father, the almighty Rowan, who she asks to join her in exposing all the corruption. In a preview clip, Rowan says that he has no desire to do the right thing and he is fleeing. But, Papa Pope does end up stepping up to the plate and Jake Ballard winds up in prison.

When it comes to the finale, the show’s producer, Betsy Beers, told Deadline, “I think the way the finale handles the journeys of each of these characters is really elegant, beautifully handled, and incredibly satisfying. And that’s what I’ll say about the finale.” Another person giving his own interpretation of the finale is actor Scott Foley, who plays Jake Ballard. In an interview with The Wrap he said, “Now there is one thing that is sort of ambiguous at the very end of the show and it’s going to leave people questioning, ‘Did this happen? Did that happen? I don’t quite get it.’ And I think it’s important to make it your own … And there’s going to be questions and disagreements and ‘It couldn’t be. Here’s why’ or ‘It has to be. Here’s why.’”

The finale episode, titled “Over a Cliff”, airs tonight at 10 p.m. ET/PT. Tune in to the ABC network to see what happens and how it all ends on Scandal. 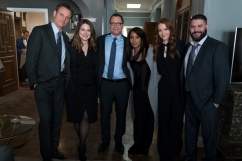