On tonight’s episode of The Voice 2018, we find out who was eliminated and who was saved by the votes, as well as the judges, to move on to the Top 12, all live. The top 20 perform and get narrowed down by America’s votes all in one live episode. This means some of your favorites may go home. Below are the minute-to-minute results, live recap and details on which contestants make it through to the top 12.

During the live playoffs, four contenders, one from each team, was already granted a free pass into the top 12. These automatic winners were Brynn Cartelli from Kelly Clarkson’s team, Sharane Calister from Team Adam Levine, Kyla Jade on Team Blake Shelton, and Britton Buchanan from Alicia Keys’ team.

First up for the performances tonight was Kaleb Lee, followed by Alexa Cappelli, who are both from Kelly Clarkson’s team. Clarkson gushed over both singers and became emotional after Capelli’s performance. After a commercial break, the Clarkson contestants continued to perform and singer D.R. King was next up on stage. Also up to perform are heartthrob Dylan Hartigan, singing “Mary Janes Last Dance” by Tom Petty and Tish Haynes Keys, who took on “At Last”.

Jumping into Adam Levine’s team of singers, Reid Umstattd was the first up to sing for a spot in the top 12. Levine said he loved the energy from Umstattd’s performance. Next up was Jackie Verna. Drew Cole, Mia Boostrom and Rayshun LaMarr all took the stage as well with performances. LaMarr was gushed over by his coach, Levine, because of his performance and his incredible spirit.

We all felt @rayshunlamarr’s performance! He’s moving right along to #TheVoice Top 12.

Team Blake Shelton and Team Alicia already performed on last night’s show, so it was time to get into the results. First up was Shelton’s team and America chose to save Pryor Baird. Shelton then had to pick one of the remaining artists to move forward and he chose someone he has high hopes for to make a difference in her genre of music … and that was Spensha Baker.

Kelly Clarkson’s team was next on the chopping block and Kaleb Lee was revealed to be saved by America. The artist then saved by Clarkson was D.R. King. Clarkson did promise to help the cast-offs with their careers outside of the show, so that was very thoughtful.

From Team Alicia Keys, Jackie Foster was revealed to be safe and moving on to the top 12. Keys then had to choose one contestant to save and she went with Christiana Danielle. Lastly, was Adam Levine’s artists and the contestant announced as safe by America’s vote was Rayshun LaMarr. This meant that Levine had to choose one remaining performer and he said that he might surprise the audience with his decision … which was to pick Jackie Verna. And that’s the top 12 for season 14. 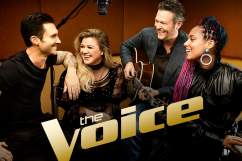 ‘The Voice’ Voting 2018: How to Vote Online Tonight for the Live Playoffs

Read More
Reality TV, The Voice, TV
On tonight's episode of The Voice 2018, we find out who was eliminated and who was saved by the votes and judges to move on to the Top 12, all live.