Tristan Thompson Cheating on Khloe with 2 Women | TMZ SportsTristan Thompson was brazenly cheating on Khloe Kardashian with not one but two women back in October, when Khloe was 3 months pregnant. SUBSCRIBE — po.st/TMZSportsSubscribe About TMZ Sports: Some of the best stories in sports have been off the field and we’re reporting on athletes from NFL, NBA, UFC, WWE, MLB and more! Subscribe…2018-04-10T22:37:11.000Z

After The Daily Mail published allegations that Khloe Kardashian could be getting cheated on, the Tristan Thompson cheating videos started popping up all over the place, according to TMZ. The Daily Mail first reported that Thompson was allegedly caught on video locking lips with a mystery brunette at a nightclub in New York City. Then, TMZ reported that Thompson has cheated on Kardashian with multiple women, posting several videos of a man who appeared to be Thompson, in questionable situations. In the above video, a man who appears to be Thompson is shown making out with two women at a hookah lounge near Washington D.C., in October 2017. TMZ also reported that Thompson was shown with another woman, going into a Four Seasons hotel room this past weekend, at 5 a.m. ET.

When it comes to Thompson’s alleged cheating with a woman over the weekend in New York City, this past Saturday, the below video was shot at PD-D lounge. There has not been confirmation whether or not this is the same woman who Thompson was reportedly shown with at the Four Seasons hours later, though TMZ reported the hotel girl was hanging out with Thompson at a nightclub earlier in the night.

For those on baby watch, they know that Khloe Kardashian is due to give birth any day and is reportedly staying at Thompson’s home in Cleveland, Ohio, awaiting labor. So, this news must be devastating for the mom-to-be, especially since her relationship with Thompson has appeared to be picture perfect to fans. Earlier today, Kardashian posted an affectionate photo of herself kissing Thompson on her Instagram account. But, how is Kardashian dealing with the news that her man is under fire for cheating?

A source “close to the Kardashians” reportedly told Hollywood Life that, “Khloe is not taking this lightly with Tristan. He needs to own up to her immediately on what he did or did not do because if she finds any truth to it he is going to be in a world of shit. Khloe would lose all the trust she has with Tristan and would highly consider breaking up with him ASAP. She doesn’t want her child to know that her mother dealt with such awful behavior even if it is the father of her child.” The same source then brought up that, “She dealt with Lamar [Odom] and what he did and promised herself she would never deal with anything like that again. It is mind blowing to Khloe that Tristan would even be caught flirting with another women let alone doing anything else.”

Previously, Kardashian was married to former basketball player Lamar Odom and infidelity played a part in the couple’s demise. But, these two men aren’t the only significant others of Kardashian to have cheated. In the early days of Keeping Up With the Kardashians, Khloe’s sister Kim hacked into Khloe’s then-boyfriend’s voicemails and discovered he had been cheating.

Currently, fans and haters are both flooding Twitter and Instagram with comments about karma, as well as words encouraging Kardashian to break up with Thompson. With a baby due any day, it would take a very strong woman to call it quits. But, it’s definitely respectable to work on a relationship with the father of one’s baby. Do you think Kardashian will break things off with Thompson? 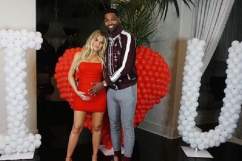 Khloe Kardashian’s Boyfriend Allegedly Cheats on Her With Multiple Women: How Is Khloe Handling the News?

Read More
Celebrities, Khloe Kardashian
Cheating videos keep popping up, days before Khloe Kardashian is said to be giving birth to her first baby with boyfriend Tristan Thompson. Will they break up?