Khloe Kardashian is due with her first baby any day and this is supposed to be the happiest time of her life. Throughout her relationship with longtime boyfriend Tristan Thompson, she has gushed over how supportive and sweet Thompson has been. Unfortunately, several videos were released yesterday, that appear to show Thompson cheating on Kardashian with multiple women, on several occasions. Most recently, Thompson was recorded with an alleged mistress, going into a Four Seasons hotel in New York, around 5 a.m. ET together, according to Page Six. The two had also reportedly been taped locking lips at a nightclub earlier in the day.

If this wasn’t heartbreaking enough, TMZ reported that a woman named Stephanie Woods has posted and deleted a sex tape video, along with text messages that are allegedly from Thompson. Woods is also rumored to be pregnant, according to The Mirror. In a graphic video that was posted to the account ms.stephaniee_/Instagram, an x-rated clip was posted, showing a woman and a man having sex. The video allegedly shows Stephanie and Thompson engaging in sexual intercourse.

According to The Mirror, the woman claims the video was shot on March 21, 2018 and she also posted, “I’m pregnant too since everything out here.” In addition to allegedly outing Thompson, Woods appeared to imply that one of Thompson’s teammates from the Cleveland Cavaliers is also guilty of infidelity. The Mirror reported Woods writing, “Ain’t the only Cavs player either. There’s 1 more.”

Woods posted some explicit text messages, allegedly from Thompson, to her Instagram account as well, according to TMZ. The text messages read, “If I was there I would grab u while u try to walk away from me than I would pull ya hair and kiss you than rip ya clothes off and lay u down while I suck ya p**** and say sorry. Than I’ll stick this long d*** in you slow but deep.” The account was either deleted or suspended after all of the postings.

In the multiple videos that have been released by the media, along with all the cheating allegations, Tristan Thompson has been linked to several unidentified women, as well as Instagram model Lani Blair, but it appears that Stephanie could be a “mistress,” according to Metro, who reported that she is the woman who was at a hotel with Thompson over the weekend. In addition to the hotel video and an NYC smooch video, there was also a hookah lounge surveillance video posted from October 2017. Have a look at a man who appears to be Thompson, with multiple women, at a lounge outside of Washington D.C. in the below clip, posted by TMZ.

Khloe Kardashian has not spoken out about any of the videos and allegations yet, but The Mirror has reported her entire family has unfollowed Thompson on Instagram. A source “close to the Kardashians” reportedly told Hollywood Life that, “Khloe is devastated and has been brought to tears after seeing the pics of Tristan with another woman. Her pregnancy is supposed to be the most special time in her life, and instead it has been ruined by Tristan and is becoming the most painful. It breaks her heart to see the man she loves with someone else. It hurts and she is feeling super emotional right now especially because she is really pregnant so all of her feelings are more intense.”

In addition, the source revealed that, “Khloe is not taking this lightly with Tristan. He needs to own up to her immediately on what he did or did not do because if she finds any truth to it he is going to be in a world of shit. Khloe would lose all the trust she has with Tristan and would highly consider breaking up with him ASAP. She doesn’t want her child to know that her mother dealt with such awful behavior even if it is the father of her child.” According to the Inquistr, Keeping Up With the Kardashians is currently filming and is catching Thompson’s cheating scandal for the next season. 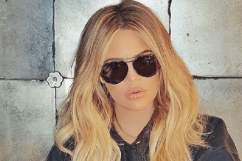 Is Khloe Kardashian Having a Baby Boy or Girl? It’s a Girl!