Actor Verne Troyer has died at the age of 49. According to TMZ, Troyer had been hospitalized earlier this month. A source previously told the site that he was “drunk and suicidal” earlier this month, and that he was treated for “possible alcohol poisoning” and subsequently placed on “some form of life support.”

“It is with great sadness and incredibly heavy hearts to write that Verne passed away today.
Verne was an extremely caring individual. He wanted to make everyone smile, be happy, and laugh. Anybody in need, he would help to any extent possible. Verne hoped he made a positive change with the platform he had and worked towards spreading that message everyday,” his family said in a statement, in part.

Troyer, who is best-known for his role as Mini-Me in Austin Powers, had been dating Brittney Powell at the time of his passing. He married Genevieve Gallen in 2004, but they broke up shortly after they exchanged vows. Over the years, Troyer has been linked to a few women including Ranar Shrider and Playboy model Heather Kozar.

1. He & Brittney Powell Were on ‘Celebrity Wife Swap’ Together

Brittney Powell had been dating Verne Troyer since early 2015 — and perhaps a little sooner. The 43-year-old — who hails from Germany — appeared on Celebrity Wife Swap with him that year, switching places with Hines Ward’s wife.

“Verne Troyer’s girlfriend leaves her quaint home and laid-back lifestyle in Los Angeles and heads to Atlanta, to switch places with Hines Ward’s wife, who’s used to a huge house and structured environment,” reads the IMDb bio for the show.

You can watch an episode of the show in the video below.

Powell is an actress. She has been on Airborne, Boy Meets World, and Friends, to name a few. In 2018, she starred in Trouble Is My Business and recently finished filming I May Regret. Additionally, Powell appeared in Playboy Magazine.

Troyer and Powell did not have any children together, but Powell has one son from her previous marriage to a man named “Kevin,” according to her IMDb bio.

Powell has not released a statement about Troyer’s death.

2. He Was Previously Married to Genevieve Gallen

In 2008, TMZ reported that a man approached Troyer at a restaurant to tell him that Gallen had tried to kill herself. The alleged suicide attempt was never confirmed publicly.

Gallen met Troyer at Hugh Hefner’s Playboy Mansion in Los Angeles. Some time after she split from Troyer, she spoke out about their relationship. According to a forum post on Digital Spy’s website, Gallen called Troyer a “sex addict” and mentioned that he had a problem with alcohol.

“At the end of the day, I think he was more in love with alcohol than he was with me,” she allegedly said.

3. He Dated Ranae Shrider in 2007 & Was Linked to Lynsey Nordstrom the Following Year

According to online celebrity dating database Who’s Dated Who, Troyer dated Ranae Shrider in 2007. Shrider is an actress who has starred in shows such as True Blood and New Girl, according to her IMDb page.

Shrider and Troyer made a sex tape, that hit the internet in 2008, according to TMZ.

“Yes, that’s Mini-Me Verne Troyer in a sex tape shot with his former live-in girlfriend at the couple’s apartment. A third party has snatched up the tape and although no deal has been made, we hear dealer Kevin Blatt, who brokered the deal for Paris’ video, is entertaining a $100k offer from SugarDVD to distribute the nastiness,” TMZ reported at the time.

Troyer was also linked to Jessica Simpson look-alike Lynsey Nordstrom in 2008. The two were spotted enjoying lunch together in January, though it is unclear if the two were romantically linked.

4. In 2009, He Was Linked to Chanelle Hayes & Yvette Monet Was Granted a Restraining Order Against Him That Year

Troyer was previously linked to British actress Chanelle Hayes in 2009, according to Who’s Dated Who. Hayes is best-known for her role in Loose Women. She appeared in five episodes of the show from 2016 through 2017.

It is unclear if Troyer and Hayes had a full-blown relationship, but Who’s Dated Who describes it as an “encounter.”

Also in 2009, a woman named Yvette Monet was granted a temporary restraining order on Troyer. According to Radar Online, court documents revealed that Monet and Troyer dated and that she was “afraid for her life” because Troyer “[owned] a gun.”

“Monet says that Troyer constantly texts and emails her despite her many requests for him to stop, and that he has sent her threatening messages warning her that she had better watch herself. She says that Troyer has told her that his friend Burt has a gun and will do anything he says and that he has a cop friend called Jose who also has guns. She requested that Troyer be asked to stay away from her, her workplace, her home and her vehicle,” Radar Online reported at the time.

Monet is a former beauty queen from Minnesota.

“Kozar was the Playmate of the Month in the January 1998 issue of Playboy. Heather graced the cover of the June, 1999 issue of the famous men’s magazine and was named Playmate of the Year that same year,” her IMDb bio reads, in part.

Kozar is currently married to former Cleveland Browns quarterback Tim Couch. The couple has been married since 2005 and has two sons together. 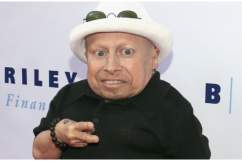 Verne Troyer Cause of Death: How Did ‘Mini Me’ Actor Die?