Today Adult Swim released a surprise April Fool’s Rick and Morty episode (well, it was kind of an episode.) The 11-minute special was called Rick and Morty Bushworld Adventures. But what exactly was this episode? Is it canon? Here’s what you need to know about the special. After you finish this article, take our poll at the end and let us know what you thought about the episode.

Although Adult Swim hasn’t said officially if this is canon or not, we can likely assume it’s not. Or, at the very least, it’s from a dimension very different from what we’ve seen with C-137 Rick and Morty. The episode was written and produced by Michael Cusack, not Justin Roiland or Dan Harmon. They gave him permission to create the April Fool’s parody, but it appears they weren’t actually involved in the special. This makes it more than likely that the episode won’t be considered canon.

There is a callback to a previous episode. Rick tells Morty after he shoots someone: “It’s a figure of speech. They’re bureaucrats; I don’t respect them.” Morty says that this seems really out of context. And he’s right. When Rick said this quote before, it was about the Galactic Federation, when Morty shot a Federation guard and thought he was a robot, quickly realizing he wasn’t. (We originally wrote that this happened in Season 3, but it actually happened in Season 1 Episode 1.)

So the parody episode does reference a canon episode, but this Australian special definitely doesn’t involve our C-137 Rick and Morty. The official Rick and Morty Twitter refers to the two as heading to the Bush Dimension, but in the episode they don’t actually go by their same names. According to the description on the video (which you can purchase from Adult Swim,) Rick and Morty in the Bush Dimension are actually named Reek and Mordi. (The Reek name reminds me of Reek from Game of Thrones, but they’re doesn’t seem to be any connection in the episode itself.)

The description humorously refers to the episode this way: “On this episode of the critically acclaimed show Bushworld Adventures, now celebrating its 10th season, we join our hero’s Reek and Mordi as they seek out the mysterious Green Cube of Bendigo. Will they succeed?”

The episode is a lot rougher around the edges than a typical Rick and Morty, and if you can believe it, even darker. At one point, Rick holds a portal gun to Morty’s head. And there’s an abuse angle that we haven’t seen since Justin Roiland’s parody short that he did before Rick and Morty was created. (More than likely, this Bushworld parody was parodying that part of Roiland’s short.)

If you really want to make this episode canon, maybe think of it as a TV show on Interdimensional Cable, but not involving any characters that C-137 Rick and Morty are going to be meeting any time soon. As commenter Matt said below, Justin Roiland has said before on Twitter that everything is canon because there are infinite realities. (But does this apply to episodes not created by Roiland or Dan Harmon? And what about the Non-Canonical Adventures?)

@CurveTheChicken they're canon in a self contained alternate reality. Infinite realities. Everything is canon.

Or maybe, instead of analyzing all of this, we should just accept the parody episode for what it is: a fun little detour while we wait for news on Season 4. As Rick has advised us before: “Stop digging for hidden layers and just be impressed.”

Do you think this should be canon or is it just a fun parody? Let us know in the comments below. Then take our poll and let us know if you liked the episode. 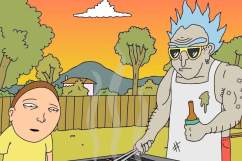