Drake was not on-hand when Brussaux gave birth to her son. According to Vulture, she welcomed the baby in France. At the time, Drake was in Los Angeles, celebrating his 31st birthday with celebs, including Leonardo DiCaprio and Tobey Maguire, at L.A. hotspot, Catch.

When Brussaux first announced that she was pregnant, she claimed that Drake fathered her child. The two had been spotted together on a date in Amsterdam in January 2017, and a few months later, Brussaux announced her pregnancy. At the time, she obtained a lawyer to protect her unborn child.

“If it is in fact Drake’s child, which he does not believe, he would do the right thing by the child,” a source told TMZ at the time.

The rumors died down, even after Brussaux gave birth. Interestingly, the baby shares the same birthday as his rumored dad — October 24. Over the past few months, Brussaux posted only one picture of her newborn son on her Instagram account, according to Vulture. Rumors that Drake fathered Brussaux’s son resurfaced this past January, after he allegedly followed her on social media when she posted the picture.

“[The rapper] followed Sophie Brussaux on Instagram after [she] posted photos of her and young son flying on a private plane. Several online blogs also published photos of Drake and Sophie together fueling speculation that they’d reconciled and that Drake was the father of her young son, Adonis,” BET reported.

Brussaux recently made her Instagram account private. The move reportedly came after rapper Pusha-T outed Drake as the baby’s father in his new song, “The Story of Adidon.” Pusha-T and Drake have been writing diss tracks about each other. In one recent Drake track, the rapper went after Pusha-T’s fiancee. This is likely the reason that Pusha-T put his personal life on blast, given his recent mention of Drake on Instagram. The post was a picture of Drake wearing blackface. It has since been removed by Instagram.

Not much else is known about Brussaux’s son. Neither Brussaux nor Drake have not commented on the rumors or on Pusha-T’s diss track. 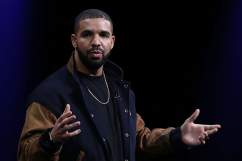