The top 5 performed live tonight, but only 3 of them move on to next week’s two-part finale, and the results are revealed live tonight. We have written the live recap for tonight’s show, along with the results below. For those who are not as patient, scroll down to the bottom of the article for the top 3 revealed.

Ryan Seacrest then let the crowd know that all of the contestants have their moms to celebrate Mother’s Day and that their performances are dedicated to the special women in their lives. Host Seacrest then enlisted the help of his own mother for the show’s big introduction.

Each contestant performs 2 songs tonight, one song dedicated to each of their moms and one Carrie Underwood hit. Paying tribute to Underwood, the show then played a video montage of Underwood’s Idol journey, including her initial audition. Underwood then met with the top 5 to go over each of their strengths and practice their top 5 performances.

Michael J. Woodard was the first contestant to perform tonight and he revealed that he’s actually a huge country music fan. For his first performance of the night, he performed the song “Flat on the Floor.” Following his performance, judge Lionel Richie said that Woodard started off the show “on a grand scale.” Katy Perry said that there is no one like Woodard and that he is “exponentially special.”

Seacrest then chatted with the contestants about their closeness to each other and their bond together. Gabby Barrett was then the next singer to perform and she gushed over Underwood, crying tears when she got to meet her. She also told Underwood that her husband is very good-looking. Underwood advised Barrett that when the competition is over, she’ll be able to better discover the kind of artist she truly is. For Barrett’s first performance, she delivered a rendition of Underwood’s song “Last Name”.

Katy Perry was the first to talk after Barrett’s performance, saying that the internet is all abuzz about Barrett. Judge Luke Bryan then called Barrett “Carrie Underwood reincarnated.” Richie called Barrett’s set “fabulous”. Cade Foehner was the next performer and lately, there have been rumors that Foehner and Barrett have been dating.

Before Foehner’s first performance, the contestants were shown taking part in a Macy’s photo shoot, getting to try on new clothes and pose for the cameras.

Then, Foehner was shown meeting Underwood, who admitted she’s been watching him on TV. Underwood advised Foehner to hold back a little in his verses, to work his way up to a fierce ending in his rendition of her song “Undo It.” When critiquing Foehner’s performance, Bryan said he agreed with Underwood’s advice for him. He also praised Foehner for his talent, as did the other judges. Next week are the hometown visits and Foehner said he hopes to go home because there’s only one person he lets cut his hair.

Want @cadefoehner to continue on? Text 8 to 21523! #AmericanIdol

Caleb Lee Hutchinson was the next hopeful to take the stage. Prior to Hutchinson taking the stage, last season’s big winning artist, Trent Harmon, took the stage to talk about his touring with Rascal Flatts this summer and his new music. Harmon won season 15 of the original American Idol show.

Next, Hutchinson was shown meeting with Carrie Underwood and he said he was terrified to perform one of her songs for her. Hutchinson’s nerves were getting to him while rehearsing with her and Underwood said he just needs to “get out of his own way”. Hutchinson gushed that his mother is Underwood’s biggest fan.

Up next was Maddie Poppe, who joked that she was nervous, but ready for her performances tonight. Poppe’s Carrie Underwood song for tonight is “I Told You So” and Underwood gushed that her voice is even more mesmerizing in person than it is on TV. Underwood said that Poppe is definitely a perfectionist and she advised her to stay true to herself in her performances. She also told Poppe to not over-analyze every little aspect of her singing because it will end up taking the emotion out of her performances.

Katy Perry said she is a huge fan of Poppe and that when the competition ends, she wants Poppe to put an album out “super quick” just so she can hear her music. Bryan said he was excited to finally see Poppe perform a country song.

After Poppe took the stage, Carrie Underwood gave a performance of her latest hit song “Cry Pretty”. For her performance, Underwood rocked a pink, rhinestone and sequin-covered mini dress. She used pink glittered tears for her makeup. Once her performance ended, Underwood said she was in awe of the top 5 contestants. When it comes to her latest album, Underwood said that she has co-written most of the songs. She also joked to Seacrest that his mother is so sweet and that her family is waiting for at a nearby hotel since it’s Mother’s Day.

Ryan Seacrest and the judges seemed to not know whether or not they were back from a commercial break after Underwood’s big set. It was a bit awkward but amusing.

Next, Gabby Barrett was shown chatting with her mother, who shared a special as then through tears with her. Barrett’s performance for her Mother’s Day set was Whitney Houston’s song “I Have Nothing.” Barrett killed it, as her mother watched and swayed in the crowd. Richie said it was daring of Barrett to take on a Whitney Houston song, but she pulled it off. Katy Perry said she was in shock and Barrett couldn’t help but to give a shout out to her vocal coaches.

Katy Perry’s mother was then shown in a pre-taped video, giving encouragement to fans out there and praising her daughter’s success.

Cade Foehner was up next and he cried with his mother in a pre-taped segment about his difficulties when growing up. His mom then read aloud a sweet letter that Foehner wrote to her. After the clip, Foehner gave a performance of Lynyrd Skynyrd’s song “Simple Man”. The judges, of course, gushed over Foehner, who was then shown holding hands with contestant Gabby Barrett backstage. The two have been rumored to be dating over the past weeks.

Michael J. Woodard was then shown in a clip with his mother as well, reading to her a letter about how much her encouragement has meant to him. The two embraced in a hug and then were shown holding each other on the American Idol set, as Woodard’s mother broke down in tears of pride. For Woodard’s performance, judge Katy Perry had tears running down her face and Luke Bryan looked mesmerized. Woodard performed the song “Still I Rise” tonight and the judges were nearly speechless after the set.

Woodard, led by Seacrest, ran to hug his mother after his speaking with the judges and she was overcome with joy. Seacrest let viewers know that it was her first time being able to make it to one of her son’s Idol performances. Lionel Richie’s sister was shown in a pre-taped clip, after a commercial break, saying that their parents would be so proud of all he has become.

Caleb Lee Hutchinson and his mom were shown meeting so that Hutchinson’s mother could read a heartfelt written message from her son. Hutchinson joked to his mom as she wiped her tears and she told her boy that she will always be his number one fan. For his performance, Hutchinson played the guitar and sang the song “Stars in Alabama.” Luke Bryan gushed that it was a great song choice for Hutchinson and Richie told him to take a bow.

Luke Bryan was the last of the judges to get a Mother’s Day video message and he then gushed about his mom, just as Seacrest surprised him with an appearance from his mama at the judges’ table. Bryan hugged his mother and tried to joke away his emotions. Bryan then said that this is his mother’s first time is Los Angeles. Bryan’s mom gushed that she’s so proud of her son and she loves American Idol.

Maddie Poppe then was shown sitting with her mom in a video clip, as her mom read a cute message from her singer daughter. Poppe’s mother said that she’s so proud of her, but also misses her at home. Poppe closed out the performances with a solemn rendition of The Beach Boys classic hit “God Only Knows”. Towards the end of her performance, Poppe became overwhelmed by emotion and could barely finish the song.

Richie stood up and begged viewers to vote after Poppe finished. Perry said that “God Only Knows” is one of her favorite songs and that Poppe did it justice. Bryan said that it’s actually a tough song to sing and she did a great job.

Finally, it was time to find out the top 3 winners … The first person revealed to be in the top 3 was Caleb Lee Hutchinson. Gabby Barrett was the second out of three singers to be announced. Only one spot was remaining … And the third member of the top 3 for American Idol 2018 was … Maddie Poppe.

This means that the top 3 are Maddie Poppe, Gabby Barrett and Caleb Lee Hutchinson. Cade Foehner and Michael J. Woodard did not make it through. 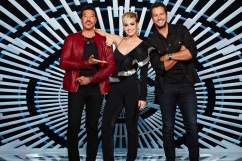