The top 3 winners of American Idol perform for America’s votes on the two-part finale for 2018. Host of iHeartMedia’s “The Bobby Bones Show” and author, Bobby Bones, returns to the show to mentor the final 3 contenders, as they each deliver three songs tonight. They will perform a hometown dedication, an encore performance of their favorite song from the season and their “winner’s single”. The top 3 finalists board private jets and are shown visiting their hometowns to celebrate their path to the finals and thank their fans who have been rooting for them throughout their Idol journeys.

In addition to the top 3 finalists performing, a few of the cast-offs from this season are also taking the stage. Jonny Brenns, Catie Turner, Michelle Sussett and Harper Grace will each perform one of their original songs. Brenns is singing his song “Blue Jeans”, Catie Turner is performing “21st Century Machine”, Harper Grace is singing “Yard Sale” for her performance and Michelle Sussett is singing “I’m a Dreamer”. Get to know more about tonight’s performances and spoilers, as well as the details on the top 3 contestants below.

We would have nothing without @gabbybarrett_ in the Top 3! #AmericanIdol

Gabby Barrett’s initial audition wasn’t perfect, but the judges decided to send her through to Hollywood and America has continued to fall in love with her. Tonight, she is performing “Don’t Stop Believin’” by Journey for her hometown date, “Little Red Wagon” by Miranda Lambert for her repeat performance, and original song “Rivers Deep”, for her winner’s single. Barrett started singing when she was just 9 years old and said that she was a daddy’s girl. Recently, Barrett was making headlines for a reported romance she is rumored to have with fellow semi-finalist Cade Foehner.

@calebleemusic has us seeing stars ?. Welcome to the Top 3! #AmericanIdol

Caleb Lee Hutchinson is a country singer, who is known for his height and his mature voice. He has been playing music for most of his life and hopes to become the next American Idol. He may be only 19 years old, but judge Lionel Richie told him that his voice is beyond his age. Hutchinson actually has a musical connection to a previous American Idol winner. He previously opened for season 4 runner-up Bo Bice in 2012. Tonight, Hutchinson is singing “Folsom Prison Blues” by Johnny Cash for her hometown performance, “Don’t Close Your Eyes” by Keith Whitley for her repeat set, and original song “Johnny Cash Heart”, for his winner’s single.

Who knows what we’d do without @maddiepoppe. Welcome to the Top 3! #AmericanIdol

Maddie Poppe has turned a lot of music this season into folk-like melodies and judge Lionel Richie has described Poppe as having a “storyteller’s voice.” Her voice and style is unique, which definitely has its draws. Poppe was quick to receive a Hollywood golden ticket when she first auditioned on the show and, according to Poppe’s professional website, she already has recorder her own music and plays multiple instruments. Poppe not only is a talented singer, she can also play the guitar, ukulele and keyboard. For her performances on tonight’s show, Poppe is performing “Landslide” by Fleetwood Mac for her hometown dedication, “Don’t Ever Let Your Children Grow Up” (which is an original song), and “Going Going Gone” for her winner’s single. 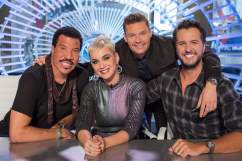