E! News always covers the big awards shows on the red carpet and this year, they are the sole network broadcasting celebrity interviews and red carpet arrivals for the 2018 Billboard Music Awards on television. Billboard will also be holding its own red carpet live stream, hosted by Sway Calloway, AJ Gibson, Erika Jayne, Justine Skye and Jaymes Vaughan. It’s called “BBMAs Red Carpet LIVE Presented by Pepsi” and it begins at 6 p.m. ET. Find the stream via Twitter here. E! Live from the Red Carpet will air from 6 – 8 p.m. ET on the E! network, but not everyone has cable. If you don’t have cable or can’t get to a TV, you can watch E! on your computer, phone or streaming device by signing up for one of the following cable-free, live-TV streaming services:

Hulu With Live TV: In addition to their extensive Netflix-like streaming library, Hulu now also offers a bundle of live TV channels, including E!. You can sign up for “Hulu with Live TV” right here, and you can then watch a live stream of E! on your computer via the Hulu website, or on your phone, tablet or streaming device via the Hulu app.

FuboTV: E! is included in the “Fubo Premier” channel package. You can sign up for a free 7-day trial, and you can then watch E! on your computer via the FuboTV website, or on your phone, tablet or streaming device via the FuboTV app.

The actual awards show airs from 8 – 11 p.m. ET/5 – 8 p.m. PT on the NBC network and Kelly Clarkson is the host this year. Paul Telegdy, President of Alternative and Reality Group and NBC Entertainment, released a statement about the choice to have Clarkson has the host of the show. Telegdy said that, “Kelly Clarkson has long been a Billboard chart phenomenon and has a first-hand understanding of what matters most in music today. Her enthusiasm for all genres of music and her innate sense of humor will make for a truly memorable night.”

And when it comes to what Clarkson has in store for her hosting gig, she told NBC that, “To prepare for hosting the ‘Billboard Music Awards,’ I already have 20 costume changes planned. I will be flying in like my girl P!nk, and calling Amy Schumer and Sarah Silverman for jokes. Well, or I’m just gonna show up and celebrate my favorite artists and get to know a few more. Yeah, maybe I’ll go with that plan.” Clarkson is also taking the stage as a performer.

Other performers for the night include Ariana Grande, Christina Aguilera, Dua Lipa, Macklemore, Kesha, BTS, Camila Cabello, Ed Sheeran, Jennifer Lopez and other big artists. There will be a throwback performance when Salt-N-Pepa joins forces with En Vogue to deliver a rendition of the song “Whatta Man.” And, Janet Jackson will be taking the stage for her first awards show performance in 9 years. Jackson is also this year’s recipient of the Icon Award. 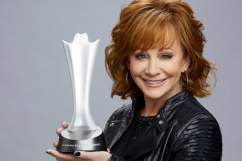