If you do not have cable or cannot get to a TV, you can watch the BBMAs live on your computer, phone or streaming device by signing up for one of the following cable-free, live-TV streaming services:

The 2018 Billboard Music Awards airs live from the MGM Grand Garden Arena in Las Vegas, Nevada and Kelly Clarkson is this year’s host. The BBMAs is known for major collaborations, as well as comebacks. Ariana Grande makes her first big awards show performance after being out of the spotlight for a bit, while she worked on new music. Salt-N-Pepa are also taking the stage to perform “Whatta Man” with music group En Vogue. One big duet is Christina Aguilera with Demi Lovato and another major performance set for tonight is Jennifer Lopez. Janet Jackson is also one of the big performers of the night.

Jackson, who is hitting the stage as a performer, is also taking home the Icon Award at this year’s ceremony. Jackson is currently promoting her tour and this is the first time she’s performing for an awards show in 9 years.

Ed Sheeran has been added to the lineup of performers, but he won’t actually be present at the venue. He will be performing live from his show in Dublin. Additional artists who are slated to perform include John Legend, BTS, host Kelly Clarkson, Zedd, Maren Morris, Grey, Shawn Mendes, Macklemore, Kesha, Dua Lipa and Camila Cabello. Kendrick Lamar, Bruno Mars and Ed Sheeran share the most nominations with a total of 15 for each of them.

E! News is televising their Live! from the Red Carpet special from 6 – 8 p.m. ET. So, tune in to catch your favorite music artists on the red carpet. As for the main event, the 2018 Billboard Music Awards Show, it runs from 8 – 11 p.m. ET/5 – 8 p.m. PT and there are no upcoming encore presentations of the awards show listed. So, be sure to watch the show online, via television or set the DVR. 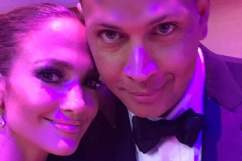