Dancing With the Stars: Athletes may be in its third week, but there’s only one more episode after tonight. The show premiered with 10 champions and Olympic stars competing for the coveted mirrorball trophy in a limited run of the show. This season is a special edition of the show and only lasts for four weeks. So, what does this mean? It means that the contestants have been getting eliminated a lot quicker than usual. Tonight was actually the semi-finals and Monday is the finals. The finale episode will just air for one hour, instead of the usual two, making way for the finale of American Idol as well.

In addition to the increased eliminations on Dancing With the Stars, each contestant has had an accelerated learning experience on the show, learning multiple dances for each episode. This is something that contestants usually have to deal with much later in the season.

So, who were the contestants that were sent home tonight? These are the results, reporting live … The first couple revealed as moving on to the finale was Adam Rippon and Jenna Johnson, followed by Tonya Harding and Sasha Farber. Only one couple would move forward to the finals and they were Josh Norman with Sharna Burgess, which was a surprise to many, who thought Rippon and Mirai Nagasu would face off in the finale.

Tonight was MVP night on the show, which meant that each contestant honored a special person in their life, dedicating their first performances of the night to that person. Tonya Harding chose her late father; Chris Mazdzer incorporated his mother in his dance; Jennie Finch’s MVP was her husband; Mirai Nagasu’s chosen person was her supportive mother; Adam Rippon involved his loving mom in his story of coming out as gay; and Josh Norman picked his four brothers as his MVP’s.

#teammoveitorlugeit deserves a standing O tonight! Who else loved the cameo from @mazdzer's mama?! ? #DWTS

Baseball star David Ross served as a guest judge tonight and he said that Rippon’s dance with Jenna Johnson was his favorite of the night. The couple received the highest score of the season so far, getting a 39 out of 40. Other athletes from previous seasons made appearances on tonight’s show and they included Meryl Davis, Von Miller and Nastia Liukin.

For the second dances of the night, Liukin and the other former athlete contestants helped each couple with their performances. The second dances were a ballroom battle. The first ballroom battle was Jennie Finch with Keo Motsepe against Tonya Harding with Sasha Farber. Out of the two, the winning couple was Harding and Farber, earning an extra two points to be added to their score from the judges tonight. Mirai Nagasu, along with Alan Bersten, were then up against Adam Rippon with pro partner Jenna Johnson. At first, it was a tie among the judges for this battle and then it was up to America to break the tie. Ultimately, Rippon and Johnson got the battle win. Lastly, Josh Norman and Sharna Burgess were up against Chris Mazdzer with Witney Carson. Both men took off their shirts for the performance and judge Bruno Tonioli could not contain himself, so he opened up his shirt as well.

#teamfireiceandspice started it off with a BANG alright! Straight bosses. #DWTS

There was an error when the judges were picking which couple they thought was better, as David Ross accidentally held up the wrong paddle. Norman and Burgess were the winners, though America would have voted higher for Mazdzer and Carson.

Usually, on DWTS, there isn’t real-time voting involved during the live broadcasts of the show, but, again, this season is different. According to ABC, there is live voting for eliminations during the east coast and central time zone airings, but west coasters are not able to participate in the live voting.

The votes are combined with the judges’ scores during each episode of the show and the couples with the lowest combination of scores and votes are eliminated. Voting for each of the contestants this way is via a live, online-only voting method during the show’s live airing. Live voting ends shortly after the last couple performs on the show during the episode. 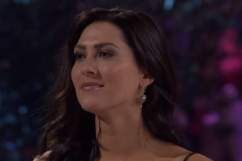 Read More
Celebrities, Dancing With The Stars, DWTS, Reality TV, TV
Who got voted off of Dancing With the Stars tonight? It was the semi-finals for DWTS and the results are in on who was eliminated.