Grace van Cutsem made a royal splash during Kate Middleton and Prince William’s wedding celebration back in 2011. Just about everyone remembers the young bridesmaid who had her hands over her ears and a pout on her face while standing on the balcony at Buckingham Palace. Apparently, the noise of the cheering crowd was too loud for the young child. The best part? She did this whilst Kate Middleton and Prince William shared a public kiss.

Grace, Prince William’s goddaughter, was one of four bridesmaids to take part in Kate and William’s special day (the others were Lady Louise Windsor, 7, Margarita Armstrong-Jones, 8, and Eliza Lopes, 3). Grace van Cutsem is the daughter of the couple’s good friend, Hugh van Cutsem. At the time, she was 3 years old — one of the youngest children in the couple’s bridal party.

As you can see below, Grace made Kate Middleton and Prince William’s wedding photos a bit more memorable.

These days, Grace is 10 years old, and probably doesn’t remember too much about her ear-covering at the Royal Wedding. Although you can still see the resemblance of that adorable 3 year old in more recent photos, Grace looks like a pretty happy kid.

Grace will most likely be attending Prince Harry and Meghan Markle’s May 19 wedding, but she won’t be a bridesmaid. Instead, she has passed the figurative torch to her younger cousin, Florence van Cutsem.

The 3-year-old daughter of Alice van Cutsem and Major Nicholas van Cutsem is the goddaughter of Prince Harry. While no one expects Florence to block her ears while standing on the Buckingham Palace balcony in an epic Royal Wedding repeat, all eyes will be on the youngster, who may do something else hilariously sweet. It is sort of par for the course when there are young children taking part in a wedding.

“It’s a little risky, because obviously these are very young children. The youngest is only two and the oldest is seven, so there’s potential for chaos, of course… I think they will add a charm to the big day, and one of them will probably end up upstaging the bride — and it might well be Princess Charlotte,” author Katie Nicholl told etalk.

Meghan and Harry won’t have to worry too much, however, as Meghan’s best friend, Jessica Mulroney, is rumored to be the chosen one that will keep the children on their best behavior.

“I think it will be down to Jessica Mulroney to probably help make sure they’re all kept in check. There will be more than one rehearsal at the chapel, more than one practice run so that all the children know exactly what they’re doing,” Nicholl explained. 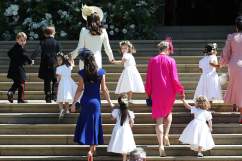 Who Are the Bridesmaids at the Royal Wedding?