Kate Middleton’s wedding dress was designed by Sarah Burton, the creative director for Alexander McQueen. The Duchess of Cambridge wowed the world in her stunning gown, which was elegant, timeless, and classic.

The gown was created using ivory satin. There was an intricate lace overlay that covered the bottom of the gown in a beautiful pattern. Additionally, the top portion of the dress was made out of lace, covering the Duchess’ top half. The lace was hand-sewn by the Royal School of Needlework.

Lace is traditional when it comes to royal wedding gowns. In fact, nearly every gown created for a royal wedding has included lace in some form or another.

Duchess Kate’s dress featured 58 buttons on the back. The dress, inclusive of its bridal train, measured more than eight feet in length. The estimated cost of the dress was £250,000 or approximately, $336,000, according to The Sun.

Kensington Palace released a lengthy explanation of the dress’ design. You can read it in part below (and in full here).

The lace appliqué for the bodice and skirt was hand-made by the Royal School of Needlework, based at Hampton Court Palace.  The lace design was hand-engineered (appliquéd) using the Carrickmacross lace-making technique, which originated in Ireland in the 1820s.  Individual flowers have been hand-cut from lace and hand-engineered onto ivory silk tulle to create a unique and organic design, which incorporates the rose, thistle, daffodil and shamrock.

Hand-cut English lace and French Chantilly lace has been used throughout the bodice and skirt, and has been used for the underskirt trim.  With laces coming from different sources, much care was taken to ensure that each flower was the same colour.  The whole process was overseen and put together by hand by Ms Burton and her team.

The dress is made with ivory and white satin gazar.  The skirt echoes an opening flower, with white satin gazar arches and pleats.  The train measures two metres 70 centimetres.  The ivory satin bodice, which is narrowed at the waist and padded at the hips, draws on the Victorian tradition of corsetry and is a hallmark of Alexander McQueen’s designs.  The back is finished with 58 gazar and organza covered buttons fastened by Rouleau loops.  The underskirt is made of silk tulle trimmed with Cluny lace.

Dress designer Sarah, Burton spoke out about the gown and what she and Middleton wanted to achieve with the overall look.

“We wanted to look to the past, yet look to the future as well. There were a lot of references to Victorian corsetry, the padded hip, the tiny cinched-in waist, and also to the arts and crafts movement with all of the hand-work on the lace of the dress and also the bustle inside to create the shape of the back of the dress. I think what we wanted to achieve was something that was incredibly beautiful and intricately worked,” Burton told the Daily Mail.

“A lot of it is in the subtlety of the detail, the handcrafted lace, and the cuts and the shapes and the folds involved in the construction of the dress, yet we still had to remember it was in Westminster Abbey so it still had to have a presence. It was this idea of having a dress with a presence and of historical importance yet being modern at the same time,” she added.

After she and William exchanged vows, the Duchess changed into a second dress, also created by Burton, one that was a bit more simple. It was strapless satin gown with an embellished waist. You can see a photo of that second dress below.

After the royal wedding, the Duchess’ first dress was put on display at Buckingham Palace’s annual summer exhibition. The gown was on display from July 22, 2011, through October 3, 2011. 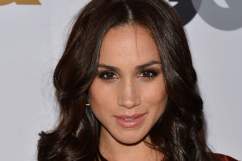 What Did Meghan Markle’s First Wedding Dress Look Like?