For example, when she was growing up, her dad was working on the set of Married… with Children, and would encourage his daughter to participate in other activities whenever she would visit him at work. In those moments, Markle fondly remembers interacting with her dad. In those exchanges, he called her “Meg.”

“There were a lot of times my dad would say, ‘Meg, why don’t you go and help with the craft services room over there? This is just a little off-color for your 11-year-old eyes,'” Markle told Esquire in an interview earlier this year. It’s unknown why Markle’s parents named her Rachel and then decided to call her Meghan. It’s also unclear if anyone in her close circle of family and friends calls her Rachel.

Over the years, people have called Meghan Markle by the name she was given at birth, but unintentionally so. Most people have had no idea that Rachel is actually the name on her birth certificate, so, since Markle’s character’s name on Suits is Rachel Zane, fans have been unknowingly referring to her by her given name for years. Some simply figured that calling her Rachel was in correlation to her on-screen persona — but that’s not actually the case at all.

Back in March, Queen Elizabeth II wrote a letter to decree her grandson’s wish to marry Ms. Markle. In the letter, the Queen referred to Markle by her full name.

“I declare My Consent to a Contract of Matrimony between My Most Dearly Beloved Grandson Prince Henry Charles Albert David of Wales and Rachel Meghan Markle, which Consent I am causing to be signified under the Great Seal and to be entered in the Books of the Privy Council,” the Queen’s declaration read.

Interestingly, there was some chatter about the Queen’s letter because it differed slightly from the one she wrote when Prince William and Kate Middleton got engaged.

“Our Most Dearly Beloved Grandson Prince William Arthur Philip Louis of Wales, K.G. and Our Trusty and Well-beloved Catherine Elizabeth Middleton,” read that letter, according to Express UK. As you can see, the Queen referred to Middleton with the adjectives “trusty” and “well-beloved.” The Queen did not use any adjectives around Markle’s name. This has lead to some discussion about whether or not the Queen likes Markle — or if she fancies Middleton more.

While watching the royal wedding, viewers expected to pick up on the names that the bride and groom used to address one another. When exchanging vows, however, Prince Harry was not referred to by his full name — Henry Charles Albert David — and Meghan Markle didn’t go by Rachel. 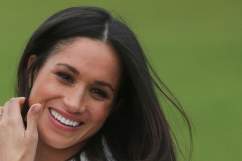