Tonight is the 2018 Met Gala and this year, E! is broadcasting their Live From the Red Carpet special for the big event again. Last year, it was reported that guests had to pay $30,000 for a ticket and the cost of a table was $275,000, according to Huffington Post. Celebrities, of course, often attend for free.

According to Fortune, the theme of this year’s event is Catholicism: “Heavenly Bodies: Fashion and the Catholic Imagination.” The hosts are Vogue editor-in-chief Anna Wintour, as always; music star and fashion icon Rihanna; couturier Donatella Versace; and civil rights attorney Amal Clooney. For all the details on how to watch different aspects of the event online, what channel to watch the red carpet on TV and more, read on below.

First lets get into the available live streams for the night. If you don’t have cable or can’t get to a TV, you can watch E! online, on your phone or on another streaming device by signing up for one of the following cable-free, live-TV streaming services:

Hulu With Live TV: In addition to a Netflix-like on-demand streaming library, Hulu also has an option that lets you watch a bundle of live TV channels, including E!. You can sign up for “Hulu with Live TV” right here, and you can then watch E! live on your computer via the Hulu website, or on your phone, tablet or streaming device via the Hulu app.

FuboTV: E! is included in the “Fubo Premier” channel package. You can sign up for a free 7-day trial, and you can then watch E! live on your computer via the FuboTV website, or on your phone, tablet or streaming device via the FuboTV app.

DirecTV Now: E! is included in all four channel packages. You can sign up for a free 7-day trial now matter what bundle you choose, and you can then watch E! live on your computer via the DirecTV Now website, or on your phone, tablet or streaming device via the DirecTV Now app. 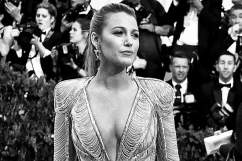 According to Vogue, (@voguemagazine) will stream the red carpet via Instagram Live and Vogue Snapchat My Stories. The footage will feature exclusive celebrity interviews and red carpet coverage as it happens, live in real time. Behind the scenes happenings will also be shown. Coverage will begin around 6 p.m. ET.

Also, you can get event updates on the E! News mobile app, @enews across social platforms (Facebook, Twitter, Instagram), as well as @E_News on Snapchat. Use the hashtag #Eredcarpet to stay abreast of all the Met Gala coverage. You can also check out some of the best Instagram photos and videos from the event on Instagram by using the #metgala tag.

The actual Gala will not be televised and guests are discouraged from using social media at the event. Perhaps this is why, celebrity attendees like Kylie Jenner gathered in the bathroom at last year’s event, to take a giant, A-list mirror selfie.

GettyNicki Minaj attends the “Rei Kawakubo/Comme des Garcons: Art Of The In-Between” Costume Institute Gala at Metropolitan Museum of Art on May 1, 2017 in New York City.

When it comes to some of E! News‘ digital and social platforms that are covering the annual fashion event, E! News will debut Met Gala segments on their Snapchat series, “The Rundown”, which is hosted by Erin Lim on Wednesday, May 9, 2018. “What the Fashion” will air on Thursday, May 10, 2018. On Instagram, E! News will premiere a new “Necessary Realness” episode, which is hosted by Morgan Stewart on Wednesday, May 9, 2018, along with fan-favorite Top Stories, which is featuring Met Gala coverage on Tuesday, May 8, 2018. All of these programs will feature highlights or special moments from the 2018 Met Gala.

Last year’s event was reportedly more intimate, with 550 people estimated in attendance. “Rei Kawakubo/Comme des Garçons: Art of the In-Between” was the 2017 theme. The exhibit for this year’s show extends across three galleries, which makes for a much larger display. These galleries include the Anna Wintour Costume Center, along with the medieval rooms in the Met on Fifth Avenue, and the Cloisters in far northern Manhattan, New York.