Myrna Colley-Lee is Morgan Freeman’s ex-wife. She was born in 1941 in Hamlet, North Carolina.

She married Freeman in 1984 and filed for divorce in 2007. Freeman’s alleged extra-marital affairs have long been blamed for the dissolution of the couple’s marriage. She never had any children of her own, but is very close with Freeman’s children from his previous relationships

Colley-Lee currently works as an artist and a philanthropist.

Colley-Lee and Freeman were set up by a mutual friend. They dated for a bit and eventually tied the knot on June 16, 1984. The two lived a relatively quiet life outside of Hollywood, spending the majority of their time in Tallahatchie County in northern Mississippi, where Freeman owns a home.

After more than two decades of marriage, Colley-Lee filed for divorce. News that the two had separated came after Freeman was injured in a car accident in Mississippi. At the time, Freeman’s lawyer, Bill Luckett, told The Clarion-Ledger that his client and Colley-Lee had separated.

Divorce proceedings continued for the next three years. In 2010, a judge granted the couple’s divorce, finalizing the terms, and sealing the documents. Details about the couple’s decision to split were never made public, but rumors of extra-marital affairs had by Freeman have often been blamed.

“It was done without a trial. Everybody is glad it’s over,” Freeman’s attorney, William R. Wright, told the press after the divorce was finalized.

2. She Has a Master’s Degree & Has Worked as a Costume Designer

Colley-Lee attended the Woman’s College of the University of North Carolina where she obtained a bachelor’s degree in art education. She went on to study scene painting and properties at Brooklyn College in New York, and earned her master’s in scenic and costume design from Temple University, in Philadelphia in 1980.

When she was younger, Colley-Lee worked as a costume designer for various films, according to It Is Weird. Her work was featured in productions such as Relativity and Wedding Band: A Love/Hate Story in Black and White.

3.She Doesn’t Have Any Children of Her Own, But Was Close to Freeman’s Family, Especially His Step-Granddaughter, E’dena Hines, Who Is Now Dead

Colley-Lee never had children of her own, but she was close to Freeman’s kids. The actor’s first wife, Jeanette Adair Bradshaw, had a daughter named Deena, whom Freeman adopted. The two are also parent to daughter, Morgana. Freeman has a son named Saifoulaye, but it’s unknown who his mother is. He welcomed another son, Alphonso, with a woman named Loletha Adkins.

Colley-Lee was particularly close to E’dena Hines, Freeman’s step-granddaughter. Hines was killed a couple of years ago. Her boyfriend at the time, Lamar Davenport, was convicted of manslaughter earlier this month, according to the Daily Mail.

Hours after Hines’ death, Colley-Lee was photographed inside of Hines’ apartment in New York. Interestingly, according to the Daily Mail, Colley-Lee was blamed for starting rumors about Freeman’s alleged romantic relationship with Hines.

“The recent reports of any pending marriage or romantic relationship of me to anyone are defamatory fabrications from the tabloid media designed to sell papers. What is even more alarming is that these fabrications are now being picked up by the legitimate press as well,” Freeman said in a statement back in 2012.

4. She Is an Artist & a Philanthropist

In 2017, Colley-Lee helped organize an art gallery focused on Afro-American Life at the Columbus Museum in Georgia. Reflections: African American Life from the Myrna Colley – Lee Collection was featured for about three months.

“Colley-Lee is herself a transplant to rural Mississippi, and her collection reflects in part her personal appreciation of the two traditions and the way in which she sees them intertwine,” reads a description on the museum’s website.

Outside of her work in the design sphere, Colley-Lee serves as a commissioner for the Mississippi Arts Commission, where she sits “on several boards, including the Charleston Arts and Revitalization Effort, Inc., a local civic arts organization; the Rock River Foundation, a philanthropic organization for the arts; the Mississippi State University Department of Art; and the Gertrude C. Ford Center for the Performing Arts at the University of Mississippi, University. She is a member of the National Museum of Women in the Arts, Washington, D.C., and the Black Theatre Network, St. Louis, Mo. She has also held faculty or staff positions at Smith College, Northampton, Mass., the Kennedy Center American College Theater Festival, Washington, D.C., and the Design and Management Institute of the National Arts Consortium, New York, N.Y.”

Back in 2005, Colley-Lee appeared on an episode of 60 Minutes. The episode was titled, “The Bridge to Gretna,” and Colley-Lee was listed in the credits as Morgan Freeman’s wife.

“‘The Bridge to Gretna’ examines a case where Katrina refugees were prevented from passing over a bridge by shotgun wielding police officers. ‘Rendition’ rebroadcasts and updates an examination of the controversial practice of the CIA handing over terror suspects to countries that use torture. ‘Morgan Freeman’ profiles the Oscar winning actor. ‘Andy Rooney’ talks about Christmas catalogs,” reads the episode’s description on IMDb. 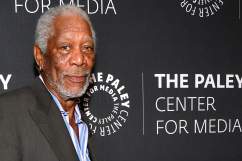 Morgan Freeman Death Hoax: No, Actor Is Not Dead

Read More
5 Fast Facts, Morgan Freeman
Myrna Colley-Lee is the second ex-wife of actor Morgan Freeman. She is a costume designer, artist, and philanthropist. Here's what you need to know.