It looks like Adult Swim has just renewed Rick and Morty. Justin Roiland shared a tweet today that has left a lot of fans cautiously excited and now Adult Swim has confirmed the news with Heavy. In a statement, Adult Swim said: “Adult Swim has made a long-term overall deal with the creators that will include 70 new episodes of the critically acclaimed series…” We’ve been waiting for news on whether Rick and Morty has been renewed yet, after rumors that the show might have been canceled. (But we never believed those rumors, because Rick and Morty is just far too popular.) Now, Justin Roiland just shared a tweet that mentions 70 episodes, and fans were wondering if this is the good news they’ve been waiting to hear. And yes, it is!

More Rick and Morty coming. Looking forward to all the tweets asking where it is! #theydrawingit pic.twitter.com/KZild3B9rP

Nothing this big has ever been seen in my shower

Roiland’s tweet is referring to new episodes of Rick and Morty on Adult Swim. His tweet reads: “More Rick and Morty coming. Looking forward to all the tweets asking where it is! #theydrawingit.” It appears that they’re already drawing new episodes (which means some episodes have been written!), and he’s looking forward to hearing fans ask where Season 4 is. (By the way: 70 new episodes would put the show at more than 100 episodes, which would allow for syndication. So that’s likely where all this is going.)

Den of Geek is saying this could mean seven more seasons of 10 episodes each, but we’re hoping for longer seasons. Dan Harmon himself has said that he hopes he can make seasons that are longer than 10 episodes in the future.

When could we see Season 4? It actually might not take too long to get at least a few new Rick and Morty episodes ready, and it’s possible that if the show was renewed, they really are drawing new episodes right now. The finale for Season 3 that we saw might not have even been the originally intended finale, since Harmon had wanted to make closer to 14 episodes rather than 10. This means that when it comes to Season 4, the Rick and Morty creative team already has access to a lot of ideas, thanks to the creative process that brought us Season 3. Throughout the creation of Season 3, some story ideas for episodes would end up evolving into completely different plots once they were finished, he told EW. For example, the Mad Max episode was originally supposed to be an episode where they entered the universe of a book that Jerry wrote. The episode morphed into something so different that they could still do the original idea if they wanted.

Harmon told EW: “But we don’t back off on stuff so much as we say ‘maybe later’ and move on. We have a pretty hefty shoebox from season 3 of ideas that are ready to go. Some are fully written, in fact.”

Other sources later said that they hadn’t started writing Season 4 yet. In an interview with The Detroit Cast, writer Ryan Ridley said: “I know how long this show takes to write, let alone animate. I’d be surprised if there was a fourth season on the air anytime sooner than 2019… late 2019.”

But maybe they’ll surprise us with a Christmas episode at the end of 2018, like Mr. Poopybutthole hinted after the Season 3 finale. (Personally, I’m hoping we get an episode sooner than that, but that’s just because of how much I love this show.)

Adult Swim’s DVD and Blu-ray for Rick and Morty Season 3 will be released on May 15. They sent Heavy an advanced copy, and we have to say that it’s pretty amazing. They also sent us a Pickle Rick’s Jar that will be available soon. Stay tuned for a review, because this Pickle Rick’s Jar is something else.

Adult Swim also said in a statement that in celebration of the renewal, the Rickmobile is taking off on a country-wide tour beginning May 17 in Atlanta. It will be making 50 stops, including San Diego Comic Con in July. 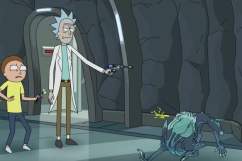