Getty David Beckham and Victoria Beckham arrive to attend the Royal Wedding of Prince William to Catherine Middleton at Westminster Abbey on April 29, 2011 in London, England. The marriage of the second in line to the British throne was led by the Archbishop of Canterbury and was attended by 1900 guests, including foreign Royal family members and heads of state. Thousands of well-wishers from around the world have also flocked to London to witness the spectacle and pageantry of the Royal Wedding.

Meghan Markle is walking down the aisle to marry Prince Harry in the 2018 Royal Wedding and the invitations have gone out to an estimated 600 guests. These guests are slated to attend the ceremony at Windsor Castle, along with the lunch reception hosted by the Queen. In the evening, the guest list has been narrowed down to 200 attendees, for a soiree being thrown by Prince Charles, Harry’s father.

So, who is attending the Royal Wedding? Who are the celebrity guests? Of course, the Royal family, which includes Prince Charles, Camilla the Duchess of Cornwall the Queen and Prince Philip, as well as many others, will be in attendance. Prince William is Harry’s best man, as Harry was for William. In addition, William’s children, Charlotte and George, are in the bridal party. Prince Harry’s goddaughters and godson are also included – Florence van Cutsem, Zalie Warren, and Jasper Dyer. CNN has reported that Prince Andrew, Princess Beatrice and Princess Eugenie are also expected.

The late Princess Diana’s siblings will be attendance and one of her sisters will provide a reading for the ceremony. They are Earl Charles Spencer, and Diana’s two sisters, Lady Sarah McCorquodale and Lady Jane Fellowes.

The Spice Girls are reportedly attending and there have been rumors of a performance. David Beckham and wife Victoria are definitely attending. One confirmed performance, however, is by Elton John, who will sing and play the piano some time during the wedding. John is a longtime friend of the family as he was close with the late Princess Diana, Harry’s mother. According to Variety, George and Amal Clooney were invited. And, Harpers Bazaar has speculated that Angelina Jolie could be on the guest list as well. Host James Corden and his wife are a part of the esteemed guest list.

I’m beginning to think she might not actually be out getting milk. #royalwedding

Actors from Markle’s television show Suits are attending the wedding as well. In fact, some of them have been posting their well wishes on social media. Patrick J. Adams, who played Markle’s on-screen husband, wrote on Twitter, “Going to bed now and thinking a lot about the strange surreal and wonderful day my friend Meghan is going to have tomorrow. Meghan – wherever you are – we are so grateful to be here to watch you both take this monumental step together. Love deeply and live well. #RoyalWedding.” In addition to Adams, Suits actors Gabriel Macht, Gina Torres, Rick Hoffman, Sarah Rafferty, Abigail Spencer, and showrunner Aaron Korsh are all expected to attend the event.

Actress Priyanka Chopra, who stated on Live! With Kelly and Ryan that she is attending the wedding and is good friends with Markle, also said that she’s been texting and chatting with Markle about a lot of the wedding details, leading up to the big day. Actresses Jessica Mulroney, Made In Chelsea star Millie Mackintosh and Janina Gavankar are also reportedly attending. Singer James Blunt actually served with Prince Harry in the Army and he is expected to appear at the wedding. Another singer, Joss Stone, is also reportedly attending. Serena Williams was also reported as on the invite list. Model Cara Delevingne is another possibility.

Today Prince Harry and Ms. Meghan Markle will become the sixteenth Royal Couple to celebrate their Marriage at Windsor Castle since 1863.

In the past, Prince Harry was romantically linked to singer Ellie Goulding, who also performed at Prince William and Kate Middleton’s wedding. There are reports of Goulding being a possible attendee at the wedding. In addition to all the royalty and celebrities in attendance, a couple of Prince Harry’s exes are expected to attend. Cressida Bonas and Chelsy Davy are reportedly attending the nuptials, but they were not invited to the nighttime reception. 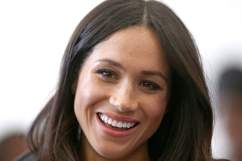 Read More
Celebrities, Meghan Markle, Prince Harry, Royal Wedding
Who made the cut when it came to getting an invitation to the 2018 Royal Wedding? Get the rundown on the guest list and celebrity attendees.