Getty Britain's Prince Harry and his US fiancee Meghan Markle arrive to attend a memorial service at St Martin-in-the-Fields in Trafalgar Square in London, on April 23, 2018, to commemorate the 25th anniversary of the murder of Stephen Lawrence. - Prince Harry will attended a memorial on Monday marking the 25th anniversary of the racist murder of black teenager Stephen Lawrence in a killing that triggered far-reaching changes to British attitudes and policing. The prince and his fiancee Meghan Markle joined Stephen's mother Doreen Lawrence, who campaigned tirelessly for justice after her son was brutally stabbed to death at a bus stop on April 22, 1993.

The Today Show is covering the 2018 Royal Wedding live on NBC, starting at 4:40 a.m. ET/1:30 a.m. PT. Today at the Royal Wedding will run until 11 a.m. ET/8 a.m. PT and will feature co-anchors Savannah Guthrie and Hoda Kotb as the lead hosts. Coverage of the nuptials will air on location from an area that overlooks Windsor Castle. Additional hosts, including Megyn Kelly, Kathie Lee Gifford, Al Roker and Sheinelle Jones will all be reporting from different areas, providing information surrounding the wedding, as well as analysis on the goings on. Royal experts will also way in.

If you don’t have cable or can’t get to a TV, but would like to watch the special live coverage, you can watch NBC live on your computer, phone or streaming device by signing up for one of the following cable-free, live-TV streaming services:

The actual ceremony for the Royal Wedding is set to take place at 7 a.m. ET/4 a.m. PT/12 p.m. GMT. Live footage of the Royal family and guest will air prior to the ceremony.

Lady Jane Fellowes, Princess Diana’s sister, will be doing a reading at the wedding. And, according to People, the couple will not share their first kiss as a married couple inside the church. They will participate in the traditional appearance on the balcony of Buckingham Palace for their kiss. 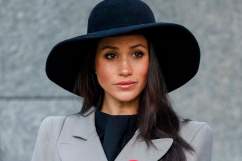