Sophie Brussaux and Drake dated for an unknown amount of time in 2017. The two were spotted at a restaurant in Amsterdam together, and a couple of months later, Brussaux announced that she was pregnant.

Before giving birth, Brussaux claimed that Drake was the father of her child and she even hired an attorney to protect the baby’s rights. Drake denied the claims, but vowed to do right by the child, if it was indeed his kid.

Drake has never admitted to fathering the child, but rapper Pusha-T just released a diss track in which he calls out Drake and says that Drake is indeed the father of “Sophie’s” son, “Adonis.”

Neither Brussaux nor Drake have responded to Pusha-T’s claims.

1. Pusha-T Rapped About Drake & Brussaux in ‘The Story of Adidon’

Pusha-T released a new song called “The Story of Adidon.” The track calls out Drake and basically outs him as the father of Brussaux’s 7-month-old son, whom Pusha-T says is named Adonis.

Fans have watched this Drake/Pusha-T feud play out by way of diss tracks. For example, Drake made mention of Pusha-T’s engagement to Virginia Williams in his track, “Duppy Freestyle.” And Pusha-T rapped about Drake’s family on Jay Z’s “The Story of OJ.”

The release of “The Story of Adidon,” seems to have upped the ante. On the track, Pusha-T raps about Drake, making mention of “Sophie” and her son, “Adonis.” In case his intentions weren’t clear, he also shared a photo of Drake wearing blackface on his Instagram page. The photo has since been removed by Instagram.

You can read the lyrics from “The Story of Adidon” below.

2. Brussaux’s Son Has the Same Birthday as Drake & Rumors That Drake Was the Father Resurfaced Earlier This Year

Call it a coincidence, but Brussaux’s son has the same birthday as Drake — October 24. Drake was not present when Brussaux gave birth to her son. According to Vulture, she welcomed the baby in her home country of France. Drake was in Los Angeles, celebrating his 31st birthday, at the time. He was photographed at popular Los Angeles restaurant, Catch.

Over the past few months, Brussaux has only posted one picture of her newborn son on her Instagram account, according to Vulture. Other outlets claim that she posted a few pictures of her baby boy and that Drake actually followed her on Instagram afterwards.

“[The rapper] followed Sophie Brussaux on Instagram after [she] posted photos of her and young son flying on a private plane,” BET reported back in January.

3. She Hired a Lawyer After She Got Pregnant

Brussaux was quick to protect her unborn child, likely fearing that Drake would deny paternity and not take care of the child that Brussaux claimed was his.

At the time, Brussaux claimed to have text messages from Drake in which he allegedly encouraged her to get an abortion. You can read the alleged texts below.

A rep for Drake responded to Brussaux’s claims, according to TMZ.

“This woman has a very questionable background. She has admitted to having multiple relationships. We understand she may have problems getting into the United States. She’s one of many women claiming he got them pregnant. If it is in fact Drake’s child, which he does not believe, he would do the right thing by the child,” the rep said.

4. There Have Been Rumors That Brussaux & Drake Are Working Things Out, But He’s Been Linked to Several Other Women This Year

For the past few months, there has been some chatter that Drake reconnected with Brussaux and that the two had been working on their relationship in an effort to raise their son together.

“Several online blogs also published photos of Drake and Sophie together fueling speculation that they’d reconciled and that Drake was the father of her young son, Adonis,” BET reported.

Drake has been romantically linked to a few women in 2018, but has yet to make anything official. He has been spotted with Instagram model Malaika Terry, dancer Reka Nagy-Miticzky, television personality Lateysha Grace, and singer/songwriter Raye.

5. Several People Have Been Posting Comments on Drake’s Instagram Page

Drake has been silent on social media for a couple of days now, but Instagram users have been sure to voice their opinions about the situation.

“Drake … what kind of father are you?” wrote one user.

“Pusha ain’t win, Drake ain’t respond yet. Drake won round 1 with duppy now it’s his turn to respond for round 2,” wrote a third, suggesting that the Drake/Pusha-T diss track feud isn’t over.

Neither Drake nor Brussaux have responded to any of the rumors. 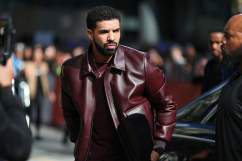