A new ARG for Westworld has just emerged that starts out as an email conversation with Aeden. If you accept the invitation to test for Elite Status, you’re taken to a Facebook Messenger conversation with Tes that is pretty interesting. If you haven’t participated in it yet, I definitely suggest that you do.

You can see screenshots of the responses you’ll receive and the questions you’ll be asked below. This is from my husband Derek’s conversation (hence why they’re responding to Derek and not me.) For every question in the conversation but one, you are given a choice of pre-selected answers. The only time you get to type in your own answer is when you’re asked if you have a question for Dolores.

Dereks’ question for Dolores was pretty brilliant. “Why are some not fit to enter the valley beyond?” Instead of getting a response, he got an error message. It appears that everyone gets an error message no matter what they enter (at least, so far there hasn’t been a magic response that gets a different answer.) However, every error message is slightly different, with the User Conformity and User Vileness numbers being different.  I asked “Are you Wyatt or secretly Arnold?” and I got the same error, but my Conformity was 11 “Conformist” and my Vileness was 2 “Constructive.” (It appears you might be labeled “conformist” and “constructive” no matter what numbers are assigned to you, but I’m still determining this.)

I answered “divert” and got slightly different responses, although the end result was almost the same. I’ll share those later.

(His looped back through a couple responses once before heading to the end.)

Now, during my questions, I responded that I would “divert molasses.” As a result I had slightly different questions. You can see those responses below:

You can be grouped into one of four zones: Ruby, Emerald, Sapphire, and Opal. Derek was given a Ruby destination, as you can see in the screenshots.

The description for Ruby Zone is: “Ruby Guests know what they want and have the strength to take it. They make choices in the blink of an eye, understanding that nothing is worse than indecision. With Ruby access, the whole world is yours to conquer.”

I, however, received the Opal grouping.

The description for Opal Zone is “Opal Guests know that a life well served is a life well spent. True leadership requires teamwork and empathy. By joining the Opal Zone, you are committing to a mission of betterment—for all.”

The description for Emerald Zone is: “Emerald Guests value liberty above all else. Their unwavering pursuit of freedom binds them together as people. Emerald Zone access gets you and your compatriots off the sidelines and into the action.”

I’m still looking for the description for Sapphire Zone is. Earlier in the conversation, it’s described this way: “Sapphire Zone is made up of guests who respect the rule of law and aren’t afraid to fight to maintain it. Those who become a part of Sapphire Zone answer to something greater than themselves.”

I’m not sure what will develop from this. But it does look like no matter what group you’re given, you receive the same Latin quote at the end. Find out what it means in Heavy’s story here.

What do you think of this new phase in the ARG? 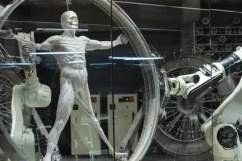 Read More
HBO, TV, Westworld
Here's what happens if you answer Tes's questions and what the groups mean.