Ariana Grande and Pete Davidson are reportedly engaged. Us Weekly reports that the celebrity couple have taken the next step in their relationship after dating for the past few weeks. “They are a perfect fit”, claims an inside source, “They are not rushing to get married. Their friends are really excited and supportive.”

The source went on to say that Grande and Davidson, both 24, are “constantly making each other laugh,” and “are very [much] in love.” Initial reports state that the couple are planning on having a long engagement, and that their families have already met.

Here’s what you need to know about Ariana Grande and Pete Davidson’s engagement:

Grande and Davidson first met when the former hosted a March episode of Saturday Night Live. Reports of them getting close surfaced a few months later, when they were spotted at an SNL after-party. According to Us Weekly, Grande spent the duration of the party hanging out with Davidson and his mother.

On May 20th, the pair were seen together at the Billboard Music Awards. “After Ariana’s performance, they were backstage and he had his arm around her,” an attendee told PEOPLE. “They seemed very lovey-dovey. He was hanging out with her and her friends… She seemed quite smitten.”

Grande also posted a photo of her and Davidson on her Instagram story. The photo shows them roasting marshmallows over a fire pit, and while their faces aren’t visible, fans were able to recognize the tattoo on Davidson’s right arm.

The pair eventually confirmed their relationship via Davidson’s Instagram on May 30th. They posted a photo of themselves in Harry Potter attire– Grande wearing Slytherin and Davidson wearing Gryffindor, two of the houses from the saga’s fictional school. Davidson wrote “The chamber of secrets has been opened…” in the caption, referencing both the second film, Harry Potter and the Chamber of Secrets, and the rumors that had been circling him and Grande. He is also wearing a hat that says “I love you” in the photo.

The couple have since been very open about discussing their relationship and posting photos of each on social media.

2. Both Are Coming Off of Celebrity Break-Ups

On May 10th, Grande announced that she and rapper Mac Miller were splitting up after dating for two years. “I respect and adore him endlessly and am grateful to have him in my life in any form”, she wrote on Instagram, “at all times regardless of how our relationship changes or what the universe holds for each of us!” The singer took a notably more sour tone, however, when a fan criticized her for “dumping” Miller so she could get together with “another dude” on Twitter.

“How absurd that you minimize female self-respect and self-worth by saying someone should stay in a toxic relationship because he wrote an album [Miller’s The Divine Feminine] about them”, Grande responded, “I am not a babysitter or a mother and no woman should feel that they need to be.” Read the full tweet below.

The singer went on to write that “I have cared for him and tried to support his sobriety & prayed for his balance for years but shaming/blaming women for a man’s inability to keep his s–t together is a very major problem.”

Davidson has also recently split from a significant other of two years. He announced that he and Cazzie David, the daughter of comedian Larry David, on May 16th, but stated that there was no bad feelings between them. When asked about the split on an episode of Open Late, Davidson told host Peter Rosenberg that David was a “very talented girl” and that both of them would be fine moving on.

Came to wine country a person, leaving a human bottle of wine

David, 24, has not publicly discussed the split, but she did post a photo of herself on Instagram after Grande and Davidson’s engagement was announced.  “Came here a person, leaving a human bottle of wine”, she wrote in the caption.

Some have taken this as David’s “response” to the news.

3. Fans Said That Grande Shouldn’t Date Davidson Because He Has BPD

While most fans have been supportive of their relationship, there have been those who feel that Grande shouldn’t date Davidson because he suffers from BPD (borderline personality disorder). “Normally I wouldn’t comment on something like this cause f**k you”, he wrote in a statement.

“Just because someone has a mental illness does not mean they can’t be happy and in a relationship. It also doesn’t mean that person makes the relationship toxic. Everybody is different and there are a lot of treatments for mental illnesses and I have done/am doing all of them.” Read the full post above.

Davidson, who’s been a cast member on Saturday Night Live since 2014, has been open about his struggles with mental health. In an interview with Rolling Stone, he discussed what it was like to be diagnosed with BPD.

“Around October [or] September last year, I started having mental breakdowns where I would, like, freak out and then not remember what happened after”, he said, “They told me there, they’re like, ‘You might be bipolar,’ and I was like, ‘OK,'” he recalled. “So they’re like, ‘We’re gonna try you on these meds… It is working, slowly but surely.

Davidson also admits that it has been difficult to juggle his burgeoning career as a comedian with his BPD diagnosis. “I’ve been having a lot of problems. This whole year has been a f**king nightmare”, he said, “This has been the worst year of my life, getting diagnosed with this and trying to figure out how to learn with this and live with this.”

We had a good night.

Grande and Davidson have gotten a number of tattoos to celebrate their relationship. The first mention of their matching ink was in May, when Cosmopolitan reported that both Grande and Davidson have a tiny cloud inked on their index finger. It was quickly debunked by E! Online, who used different images of Grande’s hand to prove that she her tattoo was noticeably different that her boyfriend’s.

There’s little to debunk regarding the pair of tattoos that Davidson got on, however. LA tattoo artist London Reese posted photo of Davidson with the initials ‘AG’ on his hand in reference to Grande. He also got a pair of black bunny ears behind his own ear, in reference to Grande’s “Dangerous Women” logo and the album of the same name. Reese’s caption read: “We had a good night somewhere in the hills of Los Angeles.”

While some may be surprised by the speed with which they’ve gotten engaged, Grande and Davidson have actually joked marriage over the past few weeks. Davidson posted a photo of him and actor Brian Tyree Henry on Instagram with the caption: “I’m having his kids.”

Grande commented on the post, writing “I look so good here” — a remark that implied she was the one who would be having Davidson’s kids, not Henry. The comedian responded with several drooling emoji faces.

The couple have provided no shortage of compliments for one another on Instagram. Davidson posted a blurry photo of them kissing with the caption: “Thanks for making this idiot fro staten island the happiest boy on earth.” Grande replied several cloud emojis. The singer has also shared videos of Davidson’s comedy shows on her Instagram story.

Despite Us Weekly’s report, there has been no confirmation from Grande or Davidson’s camps as to whether their engagement is official. 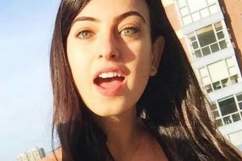