The 2018 BET Awards air tonight, at 8 p.m. ET on the BET network, as well as on BET HER, MTV, MTV2, VH1, TV Land and Logo. Jamie Foxx is hosting this year’s event and recently told Billboard that this is the best year for him to host. He explained, “You know this is the greatest year to do it! I mean Cardi B’s success, DJ Khaled’s success, Kendrick Lamar’s success, Kevin Hart’s success … and Black Panther. It’s like the mantra is, “I’m not here to host. I’m here to celebrate so hopefully if all comes together, it’ll just be one big party.” When it comes to this year’s performances, there are several big stars in the mix as performers, from Nicki Minaj to 2 Chainz.

According to Newsweek, this year’s performers include Migos, Meek Mill, Ella Mai, 2 Chainz, Big Sean, Miguel, J. Cole, Nicki Minaj, Daniel Caesar, H.E.R., YG, Jay Rock Janelle Monae, Yolanda Adams and SiR. The Washington Post has also reported that Snoop Dogg and DJ Khaled have been added to the lineup of performers. Bruno Mars was reported to deliver the BET Awards 2018 opening performance, as reported by The Independent. In addition to performing, Bruno Mars is up for three awards tonight – Video of the Year, Collaboration, and Male R&B/Pop Artist. But, the real opening performance is actually by Jay Rock, accompanied by host Jamie Foxx.

Nicki Minaj is another performer this year, who is also nominated in multiple categories – Female Hip-Hop Artist, Viewers’ Choice and Gospel/Inspirational Artist. Many of tonight’s performers are also nominees. Like Migos, for example, has four nominations. The artist dominating the categories with six nominations is DJ Khaled, while Kendrick Lamar is close behind with 5 nods as well.

Recently, Minaj released a new hot single called “Bed” with Ariana Grande, so there’s a possibility she could bring that to the 2018 BET Awards stage, as reported by GRAMMY.com. According to Vibe, artist Meek Mill has been teasing fans with “Stay Woke” videos, so a song or project by that name could be coming. Perhaps Meek is just gearing up for his BET Awards performance.

Additional stars who are appearing on the show as presenters or participants in some way, include John Legend, Tyra Banks, and Anderson.Paak, and there will be appearances by Questlove, Black Thought and Wale. Some of the other celebrities involved are also Kevin Hart, LL COOL J, Bobby Brown, and Tyler Perry, according to Billboard.

Anita Baker is this year’s recipient of the Lifetime Achievement Award, but there’s no report of her performing. In light of the honor, however, there is always a chance. In a statement made by the BET Network, according to Essence, it said, “Anita Baker is a legendary R&B singer whose soulful voice takes control of any room she’s in. Baker’s music resonated with audiences of all ages and races alike. With her extensive body of work, which spans decades, Baker continues to be one of the most legendary artists of all time.” Currently, Baker is set to retire and is on her farewell tour.

In addition to entertainment stars, there will be several activists and every day heroes honored at the event. These heroes include James Shaw, Jr., Parkland shooting survivor Anthony Borges, anti-gun violence child activists Naomi Wadler and Justin Blackmon, French “Spiderman” Mamoudou Gassama, and writer Shaun King, as reported by Essence. 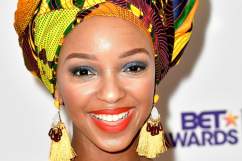