While Joe Jackson was married to Katherine Jackson and raising 10 children, he had a secret relationship with Cheryle Terrell (sometimes spelled in media reports as “Cheryl Terrel.”) Cheryle lived just five miles away from the rest of the family, where she and Joe raised daughter Joh’Vonnie Jackson together. Here is everything you need to know about Cheryle Terrell, the secret woman in Joe Jackson’s life.

Joh'Vonnie Jackson, 43, is the lovechild of Joe Jackson and Cheryle Terrell https://t.co/htTSVcYtZk via @MailOnline

Cheryle and Joe met in the early 1970s when Cheryl was a secretary for the Los Angeles police department, Daily Mail reported. They met at a Christmas party, and their affair lasted 25 years. Joe was invited to the party, and when they were introduced Cheryle had no idea who he was. “He was really charming and he asked her what her favorite candy bar was,” Joh’Vonnie said. When she said Milky Way, he showed up the next day with five Milky Way candy bars for her.

Their daughter, Joh’Vonnie, was born in 1974, a day after Michael Jackson’s birthday.  Joe spent so much time with Cheryle and Joh’Vonnie that he kept a luxury boat at their house, called Zulu Warrior. Cheryle would always have dinner ready for him when he got home.

“My mother was an excellent cook,” Joh’Vonnie told Daily Mail. “…He would come round most days sometimes without warning, he was very much a presence in my life. I was a daddy’s girl.”

My Mother is Cheryle Terrell. My Father is Joseph Jackson. This is my autobiography. pic.twitter.com/I264o4MZfR

While Joh’Vonnie was growing up, she and Cheryle Terrell only lived five miles away from Joe Jackson and the 10 children he and Katherine were raising, Daily Mail reported. Some sources said the rift between Joh’Vonnie and the rest of the family was because of how much Joe seemed to favor his only daughter with Cheryle. He visited almost every day and would often show up with lavish gifts. He even took them on weekend trips and family vacations, and they went fishing every Sunday. Most years, Joe took Joh’Vonnie and Cheryle on Christmas trips to Orlando, Florida, including a visit to Disney.

Joh’Vonnie said that Joe Jackson spoiled them and was very loving, often bringing her a different doll from every country he visited.

But while she was growing up, he also insisted on secrecy and was scared a reporter might see them all together. There were specific stores they couldn’t go to and Joh’Vonnie couldn’t have friends over to the house.

Joe spent his last years living in Las Vegas in a modest home. For a time, Joh’Vonnie lived with him in Las Vegas, according to Daily Mail. While she was in her 20s, she moved in Joe and worked as a baggage handler at the airport.

3. Terrell Was About 20 Years Younger than Joe Jackson

Cheryle was about 20 years younger than Joe, and she was just in her 20s when they met, Daily Mail reported.  “Mom wasn’t even sure she liked him, he wasn’t her type and he was married,” Joh’Vonnie said.

Cheryle’s parents didn’t approve; Joe was the same age as they were.

Although some of Joh’Vonnie’s half-siblings said that Cheryle was an obsessed fan, Joh’Vonnie said that wasn’t the case. “He saw her and had to have her,” Joh’Vonnie said. “He did all the chasing, Daddy had to keep up with my mother, she was very independent and he liked that.”

4. Cheryle Terrell & Joe Jackson Broke Up Before Terrell Died in 2014

Over the years, Cheryle eventually grew tired of the affair, Joh’Vonnie told Daily Mail. It happened around the time Joh’Vonnie’s daughter, Yasmine, was two. “She just realized she didn’t want to do it anymore,” she said. She said her mother never took any handouts and always had a job, so she didn’t rely on Joe at all.

Cheryle died in 2014, Daily Mail reported. When talking about the rift she felt between her and the rest of the Jackson family, Cheryle and Joe’s daughter Joh’Vonnie said that only two people called her to check up on her when Cheryle died. Katherine Jackson and Rebbie Jackson called her. Joh’Vonnie said that when she said something to Jermaine about it, “he started stuttering and said, ‘I was gonna call.'”

5. Cheryle’s Daughter Joh’Vonnie Has Said Most of Her Half-Siblings Treated Her Like an Outsider, But She & Katherine Are Close

Good Morning Good People! I hope you all have a fabulous Monday ✨ pic.twitter.com/MoLJVRpT4t

Over the years, Joh’Vonnie has said that her half siblings treated her as an outsider. In 2009, when she was 35, she said she never even met Michael Jackson until she was 29, despite often attending his concerts. “I feel rejected by some of my family,” she said.

In fact, she felt so rejected that she wrote about it in her book “Bastard Child.”

“I have met every single last one of them, but for some reason there has always been something stopping them from accepting me, from being close to me,” she told Daily Mail. She said they were always nice when she was around, but never called her to ask how she or her daughter were doing once she left. Part of the reason for the rift was because Joe treated Joh’Vonnie differently, more kindly than many of his other children.

Despite Joh’Vonnie being born from an affair, Katherine and Joh’Vonnie have actually been quite close. In fact, Joh’Vonnie even calls Katherine “mother,” Daily Mail reported.

At one point, Joe’s affairs, including with Cheryle, prompted Katherine to consider divorce as early as the 1970s, Fox News reported. Although Katherine and Joe had long stopped living together by the time Joe passed away, she had apparently considered leaving him much earlier than that. In March 1973, she obtained a petition for divorce and filed it with the Los Angeles County clerk. Family sources told Fox News that the Jehovah’s Witnesses church convinced her not to follow through. She considered divorce again in 1979.

But despite all of this, Katherine and Joh’Vonnie managed to develop a close relationship that continues today. 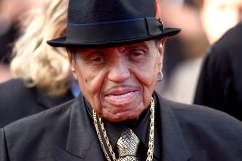 Joe Jackson’s Children: How Many Kids Does He Have?