Instagram/DBanj D'Banj pictured with his family on May 20, his son's first birthday.

D’Banj and his wife Lineo Didi Kilgrow were married in secret in Lagos on June 2, 2016. The Nigerian Premium Times reported on June 25 that tragedy had struck the couple as their 1-year-old son, Daniel Oyebanjo III, died after drowning in a swimming pool at their home in Ikoyi, Lagos, Nigeria. The singer, who was in Los Angeles for the BET Awards at the time of the incident, has not made an official statement regarding the tragedy.

In an Instagram photo however, D’Banj posted a black screen with the caption, “Trying times but my God is Always and Forever Faithful.” The Times report mentions that D’Banj was en route home to be with his wife at this time. Davido won the Best International Act award at the BET Awards, D’Banj won in 2011. During his acceptance speech, Davido thanked D’Banj.

1. The Singer Introduced His Wife & Child to the World During a December 2017 Concert

During the Supremacy Concert in December 2017, D’Banj took the time to introduce his wife and child to the audience. That concert marked his first public appearance in a year as he had taken time off to start a family with Kilgrow.

2. D’Banj Said That He Kept His Marriage to Kilgrow Secret Due to the Complications Associated With a Public Relationship

In an interview with BEAT FM in Lagos in August 2017, D’Banj opened up about his reasons for keeping his marriage to Kilgrow secret. He told the radio station, via Premium Times, “I decided to keep my marriage to Didi a secret because based on experience, relationships like this get mixed with media hypes and speculations and then it becomes complicated. You know the pressure to get married was this high and mum told me she wanted to see the girl I was dating and would want to marry. I told her that there was this babe and we didn’t want to marry yet but she insisted that she was the one for me that we should have a small ceremony and the rest is history. I’m glad I listened to her.” D’Banj also took the time to thank his friends for helping him keep the marriage a secret.

3. D’Banj Has Publicly Chastised the Media for Getting Involved in His Personal Life

Around the time of his son’s birth, in May 2017, D’Banj was quoted by the Vanguard in Nigeria of being highly critical of media intrusion into his personal life. The singer said, “My marriage is my business and it is none of your business. Whether I am married or not, mind your business. If you ever see a wedding ring on my finger, fine, but if you don’t, fine. The truth about it is that it is very important to know what you want as a brand. As a brand, I wanted to focus on the business side and keep my family and private life, private and concentrate on CREAM.” The same Vanguard report said that Kilgrow had given birth to their child in the U.S.

D’Banj and Kilgrow had been maintaining a Instagram account to show their baby’s progress. The last update came on New Year’s Day 2018 with Kilgrow posting a video with Daniel III and wishing all of their fans a Happy New Year. The first post came on Daniel III’s birthday with a photo of his hand with a caption that read, “Hello World.”

5. Some of African Music’s Biggest Names Have Taken to Social Media to Offer Their Condolences to D’Banj & Kilgrow

In the wake of the tragedy that occurred to D’Banj and Kilgrow’s son, some of the biggest names in African music and culture have paid tribute to the family on social media. Here are some of the most poignant messages of support:

May God comfort Dbanj and his house hold ?? no amount of word is enough to heal or console at times like this but strength from the almighty to see you through it we pray for ??

I pray God will give DBanj and his wife peace that will override the blames and guilt that will plague them the rest of their lives. Everyone will keep rewinding moments before it happened and trying to figure out what they could have done better.

I cannot imagine what Dbanj, his wife and family are going through right now. This is so heartbreaking.

Prayers to Dbanj and his family. May God be with you my brother ??

The loss of a child is totally unbearable and can't be understood..
I spoke to God yesterday. Asked Him why?? Sometimes I ask…. why? It's painful…too painful abeg…. I sympathise with Dbanj and his family..???

Heartfelt condolences to Dbanj and his family. Words can never be enough.

May God comfort Dbanj and his house hold ?? no amount of word is enough to heal or console at times like this but strength from the almighty to see you through it we pray for ??

I can't inmagine what Dbanj and his wife must be going through. Prayers to him and his family.??????

My condolences go to dbanj and his wife plus their families ? 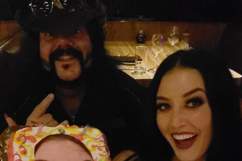