We’re less than a week away from the release of Scorpion, Drake’s fifth studio album. The Canadian rapper has been teasing the album’s release for a couple of months, but he’s made a point of keeping the tracklist and potential guest features hidden from the public.

Fortunately, other artists and producers have been more forthcoming with their knowledge. Whether through Instagram, Twitter, or leaked song snippets, we’ve managed to assemble a list of who has worked on Scorpion thus far, and who is likely to appear on the album’s official tracklist.

Here are all the rumored guest features on Drake’s Scorpion:

Future and Drake have a long working relationship, with several hit singles and a joint mixtape to their name. It should then come as no surprise that the Atlanta trapper is a strong candidate to appear on Scorpion. A snippet of a song called “Kylie & Kendall” leaked online a few months ago, and Future can be heard clearly on the song’s chorus.

Both rappers have been complimentive of one another in the past. “I would describe my relationship with Drake as doing great business”, Future said on Twitter. “We always know how to make great business, make good music, we get into the studio and we come up with different creative vibes. We go on tour, it’s always sold out. We give the fans something special. I feel like, the fans have made our relationship special. We take heed to that. It drives us, it’s like a driving force for our relationship.”

The city needs more of this and less of that. 6️⃣

Drake’s relationship with Tory Lanez has been a bit more volatile. Both artists hail from Toronto and both integrate singing into their verses, but that didn’t stop them from exchanging subliminal disses on record or throwing shade at one another on Twitter. Things finally cooled down last year, according to TMZ, when Drake and Lanez had a phone conversation to sort out their differences.

Shortly after, the rappers posted photos of themselves on Instagram with the caption: “The city needs more of this and less of that.” To further support their reconciliation, Urban Islandz claimed that Drake and Lanez worked together during the Scorpion sessions.“This collaboration is long overdue and will be good for the culture and good for Toronto,” sources claim.

“They been in the studio and recorded some stuff recently so don’t be too surprise if you see it on the album. You hear it from me first, there is a good chance it will be on the Scorpion project.”

DJ Khaled took to Instagram last week to tease his involvement with the Scorpion rollout. He posted a photo collage of Drake with the caption “June 29” along with a scorpion emoji, implying that the two are cooking something up.

This comes a few months after Khaled was photographed wearing the Scorpion bomber jackets that Drake has been giving out the promote the album. This would be the latest in a series of popular Drake and Khaled songs, with previous hits including “I’m On One”, “No New Friends”, “For Free” and “To the Max.”

As his career as evolved, Drake has experimented with different sounds from around the world. His rumored collaboration with Spanish rapper Bad Bunny seems to continue this trend. In an interview with Red Bull Radio, Bad Bunny’s producer DJ Nelson revealed that the two superstars have been working on new music. “I just heard a track from Bad Bunny and Drake”, said Nelson, “and Drake is singing in Spanish. It’s happening.”

This is not the first time that Drake has performed in different languages. In 2014, he appeared on the Romeo Santos single “Odio“, where he rapped part of his verse in Spanish. Drake and Bunny have also posted videos of themselves hanging out and working in the studio.

DJ Premier is one of the most respected producers in rap history, and Drake has been trying to work with him since his debut album Thank Me Later. “He said ‘Yo next album I want to do some stuff [with you]’ and that’s pretty much the end of it.” Premier told VIBE in 2010. “He comes down and sits down next to us to watch the show and everybody in all the other suites next to us started bugging. He was just chilling there and not acting like he was too cool.”

Drizzy uploaded a black-and-white photo of Premier to his Instagram with a Scorpion emoji, implying that, at the very least, the producer has been present during the album’s recording sessions.

One of the great nights…lots to follow! Love working with Drake! #paulankatour #recordingsession #canadian #canada #drake

Drake’s rumored collaboration with Paul Anka is easily the most bizarre we’ve heard thus far. The famous crooner announced that he had plans to work with Drizzy at the Canadian Music and Broadcast Industry Awards.

“I’m working with a brilliant young artist who is as hot as you can get right now, a fellow young Canadian and his name is Drake,” Anka said. “We recorded something that will be released, out in June. That’s all I can tell you.” Anka, who wrote Frank Sinatra’s seminal “My Way” and the theme music for The Tonight Show, posted a photo he took with Drake on Instagram. “One of the great nights…lots to follow! Love working with Drake!” read the caption. 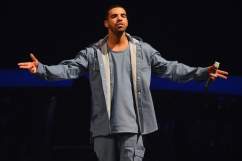