Drake has finally released his double album Scorpion. The album was highly anticipated by fans of the rapper, who were curious to see whether he would address rumors involving his Pusha-T feud and whether he actually fathered a son with Instagram model and former adult actress Sophie Brussaux.

Does Drake actually have a son?

The rapper has confirmed that he is in fact a father. On the album’s fourth track, titled “Emotionless“, he directly references his son, rapping: “I wasn’t hiding my kid from the world, I was hiding the world from my kid.” He then goes on to detail the negatives of raising his son in the spotlight, and how the tabloids have blown the entire situation out of proportion:

From empty souls who just wake up and looked the debate / Until you starin’ at your seat you can never relate / Breakin’ news in my life I don’t run to the blogs / The only ones I wanna tell are the ones I can call / They always ask “why let the story run if it’s false?”

Listen to the album below. If you aren’t signed up for Apple Music, you can learn how to sign up right here.

Drake references his song again on the song “8 out of 10.” First he addresses the claims made by Pusha-T that he’s a “deadbeat dad” by dropping the line “The only dead beats is the beats I been rappin’ to.” Then he starts the next verse by rapping “Never a matter of could I or should I, Kiss my son on his forehead and kiss your a*s goodbye, As luck would have it I’m settled into my role as a good guy.”

Rumors of Drake’s fatherhood surfaced last year, when Sophie Brussaux claimed that the rapper got her pregnant and that she had the text messages to prove it. A representative for Drake told TMZ that Brussaux had a “questionable background” and that “she has admitted to having multiple relationships.”

The representative went on to say: “We understand she may have problems getting into the United States. She’s one of many women claiming he got them pregnant. If it is in fact Drake’s child, which he does not believe, he would do the right thing by the child.”

Fans are shocked by Drake’s admission of fatherhood, and many have flocked to Twitter to share their reactions. Some jokingly suggested that the rapper should sample “Billie Jean”, given that Michael Jackson is listed as a posthumous feature on Side B. In the lyrics for “Billie Jean”, Jackson denies that he fathered a child with a fan of his. “If Drake got Michael Jackson singing in the background “the kid is not my son” he’ll be the GOAT. No more debates,” wrote one user.

Some took a serious approach, tweeting: “Just so we’re clear……Drake never had to let y’all know about his son……lol that was literally his business.” Check out some additional reactions below.

Drake’s son after finally getting that shoutout in Scorpion pic.twitter.com/twMlDW3N1w

Drake do have a son pic.twitter.com/PsyGPvD75a

Drake mentioning his son in emotionless has me like pic.twitter.com/QAsIpHuJsG

When I found out Drake really has a son #scorpion pic.twitter.com/YoO6hseUuS 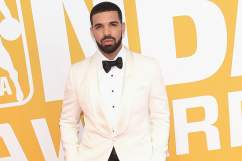 How to Stream & Listen to Drake’s ‘Scorpion’ Album