Elijah Wood spoke at the Ubisoft press conference for the release of his new game called Transference on Monday, June 11. While reading the teleprompter, Wood suffered a minor flub, but the way in which he reacted quickly went viral on social media.

You can watch the flub in the video above. As you can see around the 1:13 mark, Wood’s words get a bit tangled up and he almost loses his train of thought. He looks at the camera and says, “no” in a funny voice, before picking up where he left off.

Although the flub was short-lived, Twitter has kept it very much alive. It didn’t take long for the internet to react, many social media users posting about his funny response. Quite a few memes have also surfaced, and Wood’s name started trending on Twitter.

“Is it wrong that the thing I most want out of the #UbiE3 presentation is a gif of Elijah Wood sighing ‘No…’?” wrote one Twitter user.

“I don’t know who’s voice came out of his mouth but that was NOT Elijah Wood saying ‘no,'” wrote another.

You can see a few more of the tweets and memes that followed Wood’s flub below.

That moment when #ElijahWood said "NO!" whilst struggling to read from the teleprompter during the #UbisoftE3 conference at #E32018 like a baby deer caught in headlights. This gem should make its way into a top 10 list for E3 moments. pic.twitter.com/bzD4PxcPF4

Wood was on-hand at E3 2018 to talk about the game and to be a part of the release of its latest trailer.

“The new trailer showcases how Transference merges both movie and video game to create an unsettling effect. As players explore the maze-like puzzles of a deranged mind, they’ll also be navigating a multi-branching narrative, played out by real actors. Both segments of Transference, the game and the movie, play with the truth. Items glitch in and out as the player explores, and the snippets of family drama reveal a troubled history of lies and dangerous fixation,” GameSpot reports.

Transference has been in production for the past few years. The virtual reality game was created by FunHouse and by Wood’s SpectreVision, a film production company that he founded in 2010.

“The psychological thriller first-person exploration VR game, which debuts this fall, puts players into the uploaded memory data of a traumatized mental patient,” reads a description from Deadline.

Thankfully, he is alive and well, and the only thing that happened to him today was a teleprompter mishap. 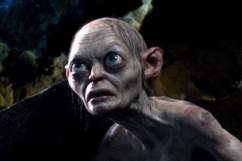 Read More
Elijah Wood
Elijah Wood misread a teleprompter during an E3 presser. His reaction to the flub went viral on social media.