Tonight a brand new movie, Love at First Dance, premieres on Hallmark at 9 p.m. Eastern as part of the June weddings series. Becca Tobin and Niall Matter will star. After you read all about this movie and watch it, come back and share any comments or questions that you may have about the movie in our comments section below. Here’s everything you need to know about Love at First Dance. (Note: If you’re looking for where the movie was filmed, check out Heavy’s story here.)

To find out what channel Hallmark is on for you, click here to go to TV Guide’s listings. Then change the “Provider” (right under TV Listings) to your local provider. You’ll be able to scroll down to see what channel Hallmark is on for you. (To find out how to stream Hallmark’s movies live, see our story here.) If you miss the premiere, you can watch encores on June 17 at  7 p.m. Eastern, June 23 at 7 p.m., and June 24 at 3 p.m.

Hallmark’s synopsis reads: “Hope is tasked with teaching Manhattan’s former “Most Eligible Bachelor” how to dance for his extravagant, society wedding. But as the dance lessons progress, complications ensue when feelings begin to develop between student and instructor.”

Becca Tobin stars as Hope. She’s known for her role as Kitty on the much-loved show Glee, and she also starred on Broadway’s Rock of Ages, and toured with the Trans-Siberian Orchestra. She hosts a celebrity podcast, The Ladygang, and is praised for her blog JuneMoss.com. She recently appeared in the Hallmark Christmas movie called A Song for Christmas.

Niall Matter stars as Eric. He recently also starred in Hallmark’s movie Frozen in Love, which premiered in January. He was also in Hallmark’s Stop the Wedding and Engaging Father Christmas. He also had a supporting role in The Predator. His other credits include The Good Doctor, The Best Years, Eureka (Zane Donovan), Primeval: New World, The Good Doctor, Constantine, Supernatural, iZombie, Guilt by Association, Remedy, Watchmen, Melrose Place, 90210, and more.

Here are more photos from the movie: 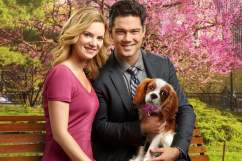 Hallmark’s June Weddings 2018 Schedule: How & When to Watch All Four New Movies

Read More
Hallmark, TV
Learn all about the newest June Weddings movie, including the times of the premiere and encores, details about the cast, and photos.