Tonight a brand new movie, Wedding March 4: Something Old, Something New, premieres on Hallmark at 9 p.m. Eastern as part of the June weddings series. It’s the fourth installment in Hallmark’s Wedding March series, and fans are excited to see their favorite characters again. After you read all about this movie and watch it, come back and share any comments or questions that you may have about the movie in our comments section below. Here’s everything you need to know about Wedding March 4. (If you’re here to learn where the movie was filmed, see Heavy’s story here.) When you finish this story, take our poll at the end of the article and let us know if you would like to see a Wedding March 5.

To find out what channel Hallmark is on for you, click here to go to TV Guide’s listings. Then change the “Provider” (right under TV Listings) to your local provider. You’ll be able to scroll down to see what channel Hallmark is on for you. (To find out how to stream Hallmark’s movies live, see our story here.) If you miss the premiere, you can watch encores on June 24 at 7 p.m. Eastern and June 30 at 7 p.m.

Here’s a look back at what’s happened before the fourth movie:

Hallmark’s synopsis reads: “With a wedding to plan, an engagement party to throw, and an inn full of surprise guests, the road to true love for Olivia and Mick takes a few unexpected twists and turns.”

Jack Wagner reprises his role as Mick for the movie. His many credits include When Calls the Heart, Ray Donovan, General Hospital, Melrose Place, The Bold and The Beautiful, Hot in Cleveland, Castle, Monk, and 16 movies of the week for which he was producer on several. Wagner was also featured in Season 14 of Dancing with the Stars.

Josie Bissett stars as Olivia. Her credits include Melrose Place, The Secret Life of the American Teenager, When Calls the Heart, Pregnant at 17, Christmas with Tucker, Paper Angels, The Hogan Family, Law and Order: Special Victims Unit, The Fire Above, Dare to Love, Deadly Vows, Baby Monitor: Sound of Fear, I Do, They Don’t, Book of Love, and more. She’s also hosted numerous shows.

Andrew W. Walker stars as Rob Atwell, Abby’s fiance. His many credits include Student Bodies, Back to Sherwood, Maybe It’s Me, Sabrina the Teenage Witch, Wicked Minds, Lies and Deception, Hot Properties, Snowed-Inn Christmas, Against the Wall, ER, CSI: Miami, Without a Trace, The Big Bang Theory, When Calls the Heart, and more.

Here are more photos from the movie.

What did you think of the movie? Let us know in the comments below. And take our poll and let us know if you’d like to see a Wedding March 5. 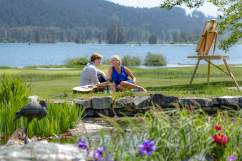 Where Was Hallmark’s ‘Wedding March 4’ Filmed? Can You Visit Willow Lake Inn?