Jamie Foxx is hosting the 2018 BET Awards and he is also currently starring on the TV show Beat Shazam. Going into his big Awards show hosting gig, Foxx told Billboard that, “Nothing is off-limits, but you know what you don’t want to do? You don’t want people to feel like they got dressed up and we got the family here [to make them feel uncomfortable]. I think we have a way to do it where it’s funny. And like I said, it’s a celebration, so any [lighthearted] jokes [go]. We don’t ever bite our tongues with jokes, but we got to [do it in] a good way where we feel good.”

While nothing may be off-limits when it comes to Foxx on stage, there are certain things that he holds dear. For example, his relationship and/or connection to Katie Holmes is a subject he stays away from. In fact, he even left in the middle of an interview when he was asked about her. In February 2018, Foxx walked out of a live interview on ESPN when he was asked if he’d played basketball with Holmes on Valentine’s Day, according to Elle.

Over the years, Foxx has denied dating Holmes, who was previously married to actor Tom Cruise, with whom she has one daughter – Suri.

Jamie Foxx and Katie Holmes have been dating for 5 years and they look so happy ❤️ pic.twitter.com/hcgaSrHcUr

Foxx and Holmes have reportedly been dating quietly since 2013 and were first spotted dancing together in the Hamptons. They have been photographed over the years, holding hands, playing basketball, walking together and smiling at each other, though the sightings have been limited.

Perhaps the two keep their relationship under wraps because of Holmes’ high-profile divorce from ex-husband Tom Cruise years ago, as he was also a co-star of Foxx’s in the movie Collateral. Last year, Hollywood Life reported rumors that Cruise was upset about the union. A source revealed to Hollywood Life that, “Tom has known about Katie and Jamie’s secret relationship since the beginning and it has always bothered him that they were hooking up. While Katie and Jamie did their best to keep things a secret from the world, Tom is too well-connected and found out about them shortly after their romance began … Tom is shocked and upset that Katie is dating a costar he once considered a close friend. He feels betrayed by both of them.”

Foxx has never been married, but there have been reports that Holmes is on her way to become his wife. Gossip Cop has debunked rumors that the two were planning to wed this summer.

Foxx has two kids – daughters Corinne and Annalise, and Corinne actually stars with Foxx on his show Beat Shazam. Her mother, according to Daily Mail, is a woman named Connie Kline.

So, when it comes to Katie Holmes and Foxx, the two appear to have a lot of fun together, but Gossip Cop has reported that they are not in an exclusive relationship. Gossip Cop has stated they still keep their own separate lives. So, it doesn’t look like the couple is planning to walk down the aisle any time soon. 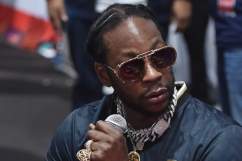