Andrea Duro and Javier Hernandez are being dogged by rumors that they have broken up prior to World Cup 2018. The couple first announced their relationship via social media during the summer of 2018. Spanish tabloid AS reported in May 2018 that actress Duro, 26, and her soccer player beau, 30, were in trouble. On her Instagram story, Duro mentioned in May that she was disappointed by the relationship. That posting sparked rumors which led Duro to post a photo of herself with the caption, “Resilience.”

The AS report comes to the conclusion that neither Duro nor Hernandez has come forward publicly to clarify their relationship status. The last loving social media post showing the pair came in April when Duro uploaded a photo of the pair with the caption simply reading, “Love.”

If Hernandez and Duro have indeed parted ways, it would mark Hernandez’s third breakup in less than 18 months. The one-time Manchester United striker was previously linked actress Camila Sodi and journalist Lucia Villalon.

In November 2010, Duro did a photo shoot for FHM magazine. She told the publication that she “likes boys that make you laugh a lot.” Though any potential suitors also have to “behave well, treat me well, speak well.” Duro went on to say that she has had plenty of boyfriends who were not terribly handsome and at the time of the interview, she was not looking for a serious relationship. Perhaps the biggest bombshell to come out of that Q and A was Duro’s assertion that 15 or 16 years old is the perfect age for a person to lose their relationship.

2. Duro Has Been Beset With Allegations That She Photoshops Her Instagram Photos

Spanish tabloid TK reported in March 2018 that Duro was throwing shade at those who dared to suggest that the actress was touching up her Instagram photos before posting them. One troll asked Duro had been retouching her photos or did her nose look different every day. Duro’s response was to joke about the remarks “hurting” her and saying the comments reflected the envy of the trolls rather than genuine hatred. In a defiant message to the trolls, Duro said, “The truth is that no! I would like that you can see me in person and tell me if it stings or not, in person everything changes, by photos it’s something else.” A month earlier, Duro took to Instagram to tell trolls that she did not have a nose job.

3. Duro Spent the 2017/18 Soccer Season Living in London With Chicharito

Through social media posts, Duro showed her life living in London with Chicarito while he played for West Ham United in the English capital. Duro, a native of Madrid, Spain, where the Mexican striker also played for a season with Real Madrid, told Hola upon her return to Spain at a red carpet event, “I am very happy and very good in every way, I just landed from London like someone who says I have not had time to even look for a dress to come to this event.” Duro made it clear that she used her time in London to study English and to hone her acting skills. Duro concluded, “My base of operations will always be Madrid because this is where I have lived all my life and where most of my work is, but London is great for studying and training.” 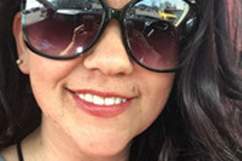 4. Duro Says She Could Not Live Without Her iPhone

In a November 2013 interview (above) about her favorite things, Duro said that she could not live without her iPhone. During the same interview, Duro spoke about her love of Facebook and Twitter. According to Duro’s IMDb page, she is best known for her tole in the TV series, Physics and Chemistry. The show ran from 2008 until 2011. Her first major movie was 2010’s Three Steps Above Heaven. Most recently, Duro appeared in the 2017 movie Passage at Dawn.

5. Chicharito’s Ex-Girlfriend Reacted to News of His Relationship With Duro By Writing, ‘Love Is Like a Fart’

Shortly after news of Hernandez and Duro’s relationship became world news, his former girlfriend, Mexican singer Camilla Sodi, posted a meme to Instagram that read, “Love is like a fart, if you have to force it, it’s probably a s***.” La Opinion wrote at the time that Hernandez’s other prominent ex, journalist Lucia Villalon, did not make any such comment but rather posted photos showing her partying on a yacht in Ibiza at the time.