As Jersey Shore: Family Vacation comes to a close, season 2 filming has already started up and the location is Las Vegas, Nevada, as reported by Us Weekly. It makes sense since DJ Pauly D and Ronnie Ortiz Magro, two of the cast members, both live in Vegas. The cast will reportedly be living in a rented house again, not a hotel.

This past season, the main cast member who decided not to come back was Sammi “Sweetheart” Giancola. The reasons for her staying away were mainly because of her ex-boyfriend Ronnie Ortiz-Magro’s participation in the show. The two met on the original Jersey Shore and carried out a volatile off-and-an relationship for years. A source explained to E! News that Giancola is in a relationship with someone and that, “She’s happy in her current relationship and didn’t want to be disrespectful of that.” Giancola released an official statement on her decision to skip out on the show, saying that she has moved on from the show, is in a stable relationship, and she doesn’t want to put herself in a potentially toxic situation.

I simply adore you. ?

But, when it comes to season 2, Pauly D says that Giancola might return to the show or at least make an appearance because of the fans. He told People that, “I can almost bet on [Sammi coming back]. For someone to say no to that this time and then all the media and everybody, all those comments … She must see them. She must want to do it. I gotta say, she must have to want to do the second one.” Cast member JWoww also chimed in, according to Bustle, saying, “For the simple fact that she will always be a part of us and she’ll always be mentioned or brought up, at least capitalize on it. Speak your own truth. Come in, fight us on whatever, or love us, or, like, be around us. It’s kinda sh*t she’s not taking the opportunity.”

Cast-off Angelina Pivarnick, who became an enemy of the cast, came back as part of a prank during season 1 of Jersey Shore: Family Vacation. She ended up making amends with her cast-mates, but they felt she hadn’t yet earned the right to stay on as a full-time cast member again, just yet. After filming, when her episode aired, Pivarnick struck up a social media fight with cast-mate JWoww and Deena Nicole Cortese also chimed in. JWoww and Cortese voiced that they thought Pivarnick wanted to make amends, like she said on the show, so they didn’t understand why she was firing shots at JWoww. We’re guessing that if Pivarnick returns for season 2, it will just be for an appearance and it could cause some major drama.

Unfortunately, cast member Cortese may not be filming season 2, or at least might be absent from some of filming. In a deleted tweet, according to Bustle, Cortese explained, “I am not in Vegas [because] I have some personal stuff going on at home that I need to attend to which prevented my schedule and production schedule to match up accordingly.” Hopefully Cortese is able to be a part of season 2.

So, when is the Jersey Shore: Family Vacation season 2 premiere date? According to MTV, the show will return in August 2018, but an exact date has not yet been announced.

As for a season 3, it’s definitely a possibility, especially since the male cast members were holding up signs at the 2018 MTV Movie & TV Awards, instructing fans to vote Jersey Shore for their city. Since season 2 already started filming, it would have to be for season 3. And, the cast may be on a bit of a time crunch, especially since cast member Mike “The Situation” Sorrentino’s tax evasion sentencing has been scheduled for September 7, 2018, according to Page Six. He could end up going to jail for up to five years. 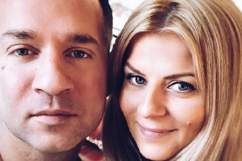 Who Is Mike ‘The Situation’ Sorrentino’s Fiancee Lauren Pesce?